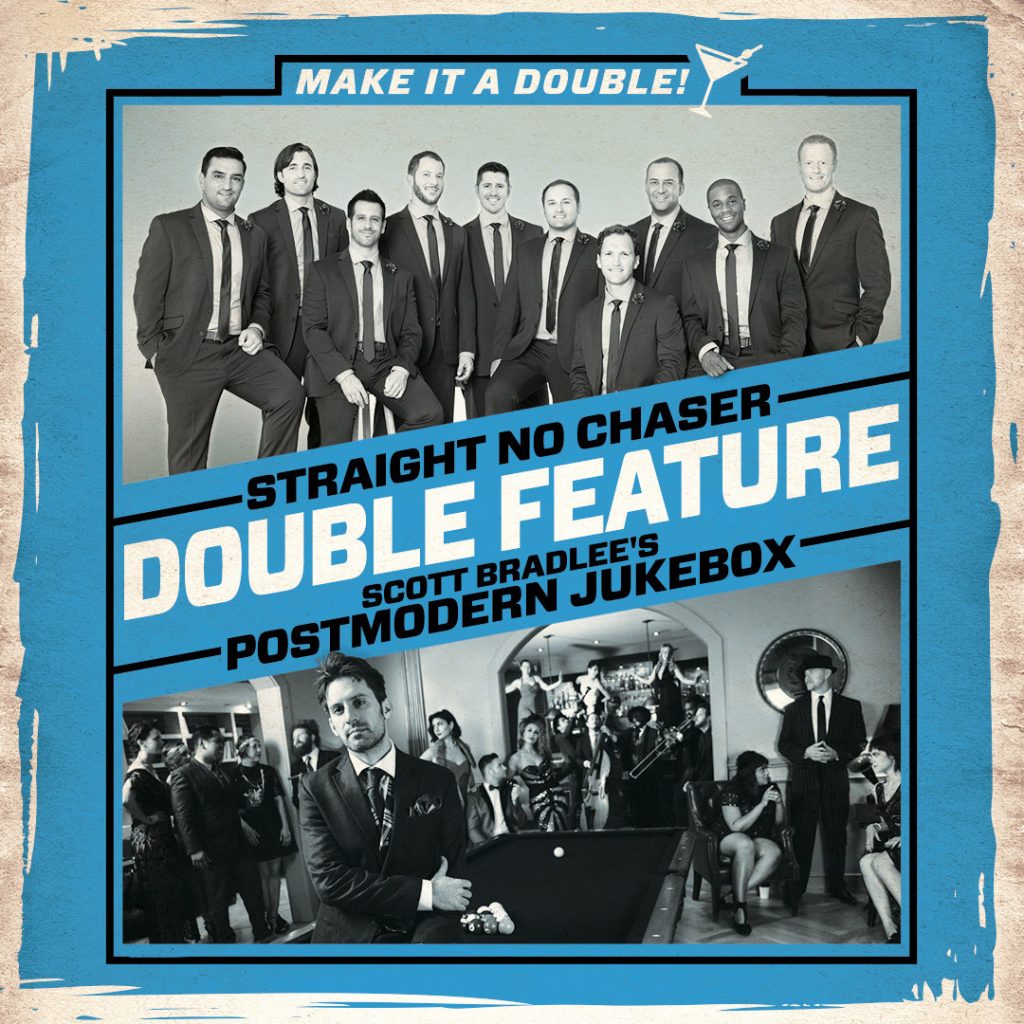 Fans of retro pop sounds with a cheeky modern twist are in for the experience of a lifetime this summer as Postmodern Jukebox and Straight No Chaser join forces for a co-headlining tour of the United States. Produced exclusively by Live Nation, the 25-city jaunt kicks off in Chicago on July 13 and will include stops in Cleveland, Boston, Nashville and Los Angeles for the two classic-meets-contemporary sensations, both of whom mash up classic pop stylings and modern pop hits in their own unique fashions.

Both bands deliver contemporary pop songs with timeless flair – the stylistic diversity, real musical and vocal skill, and dedication to craft of a bygone era. Straight No Chaser shirk the blazers and khakis of campus a cappella groups for something far less strait-laced (or straight-faced), training their jaw-dropping vocal prowess and soulful harmonies on past and current hits. Scott Bradlee’s Postmodern Jukebox reimagines contemporary pop, rock and R&B hits in the style of various yesteryears, from swing to doo-wop, ragtime to Motown – or, as Bradlee himself puts it, “pop music in a time machine.”

In the process, both groups have found remarkable success and attracted dedicated fanbase who appreciate their unmanufactured talents and joyous energies. Since Bradlee created PMJ in 2009, the project has amassed more than 650 million YouTube views and 2.5 million subscribers, chalked up more than 1 million likes on Facebook, performed on “Good Morning America,” topped iTunes charts with all 14 of their releases since 2014, caught the attention of NPR Music and NBC News, and played hundreds of shows to sold-out houses around the world.

SNC have themselves garnered more than 80 million views on YouTube, made numerous national TV appearances including NBC’s “Today,” ABC’s “World News,” “Watch What Happens Live,” CNN, “Fox & Friends,” “20/20” and more. The group has played to countless sold-out audiences, making them continuously one of the top 25 touring artists in North America according to Pollstar magazine. The band celebrated its 20th anniversary in 2016 with a successful world tour and the release of its third full-length holiday collection, I’ll Have Another…Christmas Album. The album, which blended beloved carols with holiday favorites made famous by Coldplay, Mariah Carey and Stevie Wonder, followed their now-classic 2008 debut, Holiday Spirits, and its smash 2009 follow-up Christmas Cheers, both of which topped both the iTunes and Amazon sales charts and were certified gold by the RIAA.

Despite finding such success for the project on the road, Bradlee continues to arrange and record new arrangements every week for PMJ’s legion of fans.  The multi-talented collective has interpreted hits by Lady Gaga, Beyoncé, The White Stripes, Lorde, Outkast, Radiohead, Maroon 5 and many more. Last year, PMJ collected 18 favorites from among their hundreds of songs to compile The Essentials for Concord Records. The album included the song that put the band on the map, a vaudevillian distressing of Macklemore & Ryan Lewis’ “Thrift Shop,” and their ’50s doo-wop version of Miley Cyrus’ “We Can’t Stop,” which garnered more than 19.5 million views and was named one of the “9 Best Viral Cover Videos of 2015” by People magazine.

Straight No Chaser originally came together in the fall of 1996 at Indiana University, quickly setting itself apart from other a cappella groups with its contemporary repertoire and dynamic approach while reinventing the idea of a cappella on the modern pop landscape. SNC has released six full-length albums, split between their three collections of holiday favorites and three that take on classic songs by artists like Elton John and Marvin Gaye as well as current megahits from Hozier, The Weeknd and Meghan Trainor. A host of music-world giants have shown their admiration by recording with the ensemble – iconic names including Stevie Wonder, Paul McCartney, Seal, Phil Collins, Dolly Parton, Sara Bareilles and Jason Mraz.

Don’t miss your chance to catch Postmodern Jukebox and Straight No Chaser live. Dates are as follows: