This August, songwriting legends John Fogerty and Jackson Browne will co-headline two east coast concerts. The shows will take place on August 4th at PNC in Holmdel, New York and Jones Beach in Wantagh, NY on August 5th. Fogerty and Browne will each perform full sets with their respective bands. The two recently joined up for last year’s Rock and Roll Hall of Fame Inductions where together, along with Tom Petty they helped celebrate the music of Randy Newman. 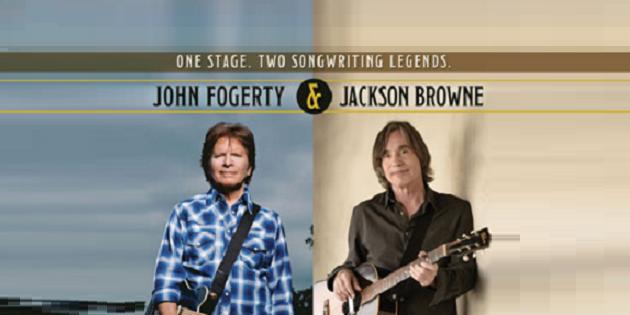 Jackson Browne has written and performed some of the most literate and moving songs in popular music and has defined a genre of songwriting charged with honesty, emotion and personal politics. He was honored with induction into the Rock and Roll Hall of Fame in 2004, and the Songwriter’s Hall of Fame in 2007. Beyond his music, he is known for his advocacy on behalf of the environment, human rights, and arts education. He’s a co-founder of the groups Musicians United for Safe Energy (MUSE), Nukefree.org, and the Success Through the Arts Foundation, which provides education opportunities for students in South Los Angeles.

John Fogerty — singer, songwriter and guitarist — has sold over 100 million records, earning 18 Gold Albums and 10 Platinum Albums. He was inducted into the Rock & Roll Hall of Fame in 1993, won the Grammy Award for his album Blue Moon Swamp in 1997 and was inducted into the Songwriters Hall of Fame in 2005. He is also a BMI Icon Award Winner. In addition, Fogerty and his #1 phenomenal recording “Centerfield” were honored during the 2010 National Baseball Hall of Fame Induction Ceremonies—the first time the National Baseball Hall of Fame has immortalized a musician or song as part of the annual ceremonies. He’s also called the “Father of the Flannel Shirt.”