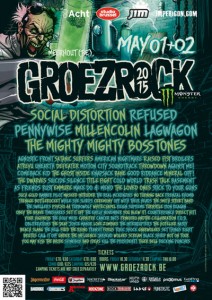 Let’s face it. It’s been 5 years since The mighty mighty bosstones  came to visit Groesrock. That’s way too long. So they decided to give the ska punk legends a call and knocked on wood. The impression is that they’re f*cking stoked to come back!

Back in 2008 a cool Fat Wreck band from Philly played early in the afternoon. The band never really broke up. It just got real quiet after their “Distractions” EP from 2009. Singer Dave Hause however made a name for himself as a solo artist and played the Acoustic Stage twice. Now, we’re far from tired of his solo work, but Groesrock thought it would be amazing if Dave and his buddies would play some tunes together for the first time since quite a while. So yes, rumors are true. The loved ones are coming to Groezrock 2015!

If these names did not floor you, be prepared to get beat down by Belgium/Germany’s nasty. These guys just finished the Taste Of Anarchy tour so they are all warmed up and ready to go. You will get your ass handed to you as they unleash hell at Groezrock.

Brutus is a new Belgian trio that has been making quite a name for themselves the last year with a blistering mix of post rock and punk. Yes, having a really good female drummer/singer might seem something of a gimmick. But this trio more than deserves a spot at Groezrock after a couple of awesome 7-inches and about a gajillion awesome live shows.