In her sixth decade of providing music magic, Barbra Streisand continues to reach the number one position on the charts. Her “Back To Brooklyn” concert DVD has reached #1 on the Billboard Top DVD Music Videos chart. Achieving that distinction with the Columbia Records release, Streisand has now topped the DVD charts five times. Her success in the DVD field also includes having earned nine Gold DVDs, six Platinum and three Multi-Platinum. On the CD charts, she has reached #1 nine times and is the only recording artist to have accomplished #1 albums in five consecutive decades. She has achieved 51 gold albums, 30 platinum and 13 multi-platinum. 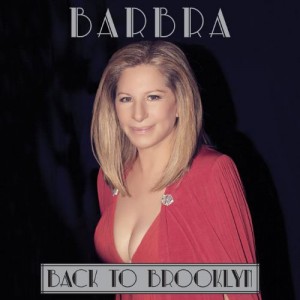 The “Back To Brooklyn” concert DVD captures Streisand’s first musical performance in her native Brooklyn since she departed at age 16 to pursue her acting career and became one of the most popular and famous musical performers of her time. Throughout the concert, which includes nine songs she had never previously performed publicly, Barbra reflects upon her years growing up in Brooklyn, and to mark the occasion, she commissioned special lyrics for two songs: ACT I opens with Andrew Lloyd Webber’s “As If We Never Said Goodbye,” which she turns into an homage to “the Brooklyn docks, the nova lox” and other fond memories of the sights and sounds of her youth. When she triumphantly sings, “I’ve come home at last,” the audience rises from their seats with a thunderous welcome back ovation.

ACT II pays tribute to the people and places in Brooklyn today, with a re-written lyric to Cole Porter’s “You’re The Top”: “You’re the top, you’re a Brooklyn trolley…you’re the top you’re a hot bialy!”

It also provides biographical video and still photo images of the artist’s childhood and early career.
Among the many highlights of the evening was the first-time ever pairing of Barbra and her son Jason Gould. Other artists joining her include trumpet player Chris Botti and the young Italian singing quartet, Il Volo. Subsequent to the Brooklyn performances, Ms. Streisand presented a slightly revised version of the concert in record-breaking tours in the US, Canada, Europe and Israel, her first concert appearances in six years.

The concert performance is directed by Barbra Streisand and Richard Jay-Alexander, and written by Barbra Streisand, Jay Landers, Richard Jay-Alexander and Jeffrey Richman. The “Back To Brooklyn” concert is also currently featured on Public Broadcasting System stations, where it has become the top-rated Great Performances series offering this season, raising funds for PBS local stations.