Universally hailed as one of the most popular rock acts in the world, Foreigner will rock across Europe and Israel for a massive summer 2016 Tour. A formidable musical arsenal that continues to propel sold-out tours and album sales, the band will belt out full electric performances of their biggest anthems at some of Europe’s greatest venues starting at London’s Palladium on Tuesday 7th June, followed by dates at Belgium’s Graspop, Cologne’s Tanzbrunnen, Tel Aviv’s Caesarea Amphitheatre, and many more.

Fans will see why it ‘Feels Like The First Time’ when the band performs rock’s greatest hits including the unforgettable anthems ‘Juke Box Hero’, ‘Cold As Ice’, ‘Urgent’, and ‘I Want To Know What Love Is’. With ten multi-platinum albums and sixteen Top 30 hits, Foreigner is universally hailed as one of the most popular rock acts in the world with album sales, now exceeding 75 million. Responsible for some of rock and roll’s most enduring anthems, the band continues to rock the charts more than thirty years.

Foreigner’s popularity continues to soar, having taken over the US media in 2015 with recent music usage in shows like Orange Is the New Black, The Late Show with Stephen Colbert, and The Tonight Show with Jimmy Fallon, and the films Pitch Perfect, and Magic Mike. Foreigner is sure to generate the same excitement in Europe and Israel this summer as they bring their enduring brand of rock and popularity across the sea. “Our music has touched a lot of people worldwide,” says lead guitarist Mick Jones. “Unwittingly, we’ve weaved into the fabric of people’s lives.” 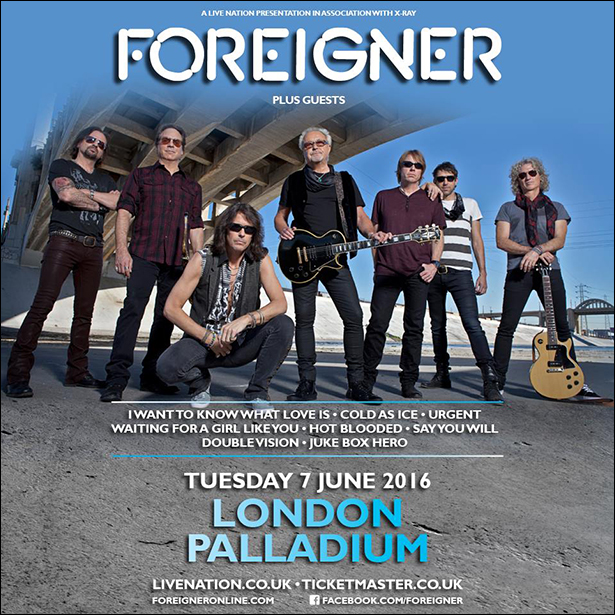