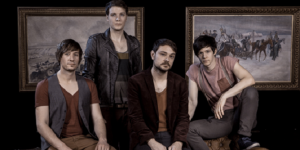 Almost two years after the suprising German chart success of “Hold On, Liberty!”, The Intersphere return with a brand new studio album. And instead of relying on formulas or formats, the band have relied completely on their hands an hearts. That being said, The Intersphere are pushing the boundaries of rock music towards new horizons with a pace and precision seldom found in German bands in the last few years. Under the production acumen of Singer/Guitarist Christoph Hessler and co-producer/mixer Moritz Enders (whose credits include German indie powerhouses Casper, Kraftklub and Madsen), this fourth release in The Intersphere discography was recorded together with Wolfgang Manns at Toolhouse Studios.

“‘Relations In The Unseen’ is not a concept album, but there is definitely a purveying train of thought overall. We all communicate, not only directly, but also indirectly through gestures, body language, thoughts and connections that are unconcious at first,” says Christoph Hessler. “Lyrically, the album concentrates on these unconcious things that influence our feelings, thoughts and reactions. Every day we’re offered countless examples of this – invisible, unknown – over distances, times and dimensions.”