“We had a ball making this record,” Bryan Adams says of his thirteenth studio album, ‘Get Up’. He does, indeed, sound more exuberant than his usual thoughtfully cheerful presentation. There’s excellent reason for it: ‘Get Up’ is rock’n’roll, plain and not so simple, to its core. “Do you want to start a revolution or do you just want to have some fun?” he asks in “That’s Rock’n’Roll.” “A battered Vox and a beat up Gibson, that’s all you need to get the job done.” Thing is, he’s proving it in that very moment. “It’s the most UP record I’ve ever made,” he said.
But forget how much fun Bryan had. The real issue’s how much you’ll have with his thirteenth album—and if I’m any judge, you’ll have a ball too. He’s in excellent company to have such a good time, reunited with his original songwriting collaborator, Jim Vallance, and newly connected to producer Jeff Lynne.

Vallance was Bryan’s co-writer on some of the most important songs of his career: ‘Cuts Like a Knife’, ‘Summer of 69’, ‘Heaven’ and ‘Run To You’, among half a hundred others. Their partnership more drifted apart in the early 90’s, and it seems to have come back together similarly. 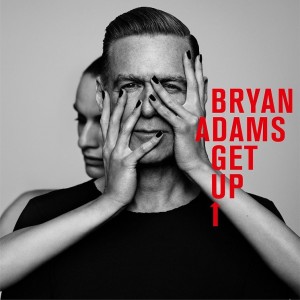 When Bryan began writing the songs that became ‘Get Up’, he’d never even worked with Jeff Lynne. The two had met over the years, originally in Lynne’s hometown of Birmingham, England in the 80’s. He attended one of Adams’s shows back then, but it was a serendipitous meeting in Los Angeles in 2014 that fuelled the recent production when Lynne invited Adams to his studio. After they’d chatted awhile, “I got the feeling it was time to go,” Bryan remembers, Jeff asked, “Bryan, do you fancy cutting a track sometime?”

“It was absolutely unpremeditated,” Adams says. Adams had a song he’d written thinking about the late Buddy Holly (‘You Belong To Me’), and another that was quite Beatley (‘Don’t Even Try’). The Adams heart never drifts far from the Beatles, though he’s never gotten so close to it as Jeff Lynne has. The result is a plain rock’n’roll that has the kind of balance and diversity of musical texture of the later Beatles—the shadow of complexity without ever losing the spirit of simple joy.

When Bryan got back to L.A., after an Australian tour, “The track was almost completely finished,” Bryan recalled. “I hadn’t expected it. He’d sat and played bass and drums, added guitars. We met up in LA shortly afterwards and we added some acoustic guitars together. A few days later he sent me a mix, I was completely floored.”

“Man, this was for me. Not having to make a record in the conventional way, that was exciting.” Adams exclaimed. “The thing was, we ended up doing a song every other month and eventually we had an album. What’s interesting is we’d never discussed the idea of ‘making an album’ together, it just happened!”

Their process was, Adams would send a song in on-the-road demo form (which can be pretty elaborate—his ‘Room Service’ album was made almost entirely in hotel rooms) then Lynne would elaborate and replace the things he thought needed replacing on it. “Things tended to come back way better; some of the things I hadn’t quite worked out, he completed. Particularly, how guitars sounded with vocals.” And the core of this album, of course, is how Adams’s vocals sound against guitars. It’s part of why “’Don’t Even Try’ sounds like an outtake from Rubber Soul” is an entirely valid comparison. And it’s part of why he says, “I wish I’d made this record 25 years ago.”

Bryan Adams has been at his art and its crafts for a very long, time as pop measures such things, but he has displayed a remarkable consistency through it all. “I don’t know that the sound will ever transmit into today’s world being so guitar driven, but I will say it’s really a record for people that love the sound of real guitars bass and drums,” he says, by way of explaining that he doesn’t worry about it. He adds, in the form of a credo: “I wanted to always make records that are completely true to me.”