Antillectual is going on a three week tour through Canada. The Canadian tour will bring the band from west to east playing cities like Calgary, Edmonton, Montreal and Toronto. Clipwing and Fortune Cookie Club are accompanying Antillectual on their journey.

After playing an amazing show in Montreal in 2012 Canada rose up on Antillectual’s go-to-list. This August the Dutch band will do its first run through Canada. Antillectual is promoting their album ‘Perspectives & Objectives’, which was released by A-F Records in North America in 2013. 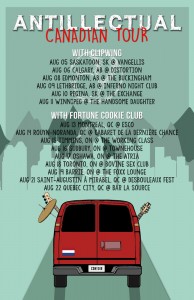