Open ears and an open mind are the essence of singer, guitarist and songwriter Robert Cray, whose career spans from the roots of the blues to the pinnacles of rock, from the 80s to this moment. He grew up listening to the gospel of the Five Blind Boys of Mississippi, Bobby Bland’s soul, Jimi Hendrix’s rock guitar and the Beatles pop sounds. Those influences and the signature sound Cray has imprinted on modern popular music are brought together in the Robert Cray Band’s double CD and video package 4 Nights of 40 Years Live. 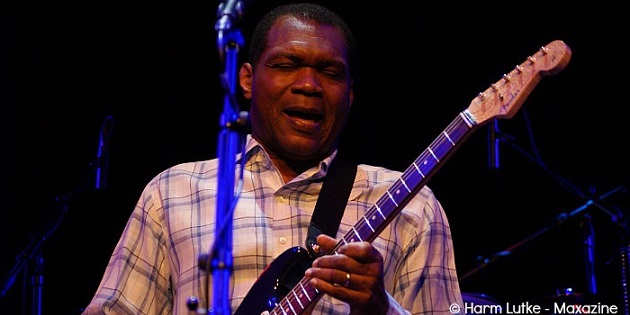 The set will be available in a variety of formats – 2 LPs + Mp3, 2 CDs + DVD, Blu-Ray + 2 CDs and digitally. 4 Nights of 40 Years Live will be released August 28 on the Netherlands-based Mascot Label Group.

The first CD is fresh, live recordings from four nights recently recorded at four venues in the LA area. With his current band – longtime bassist, collaborator and friend Richard Cousins, keyboardist Dover Weinberg (who was in Cray’s first band) and drummer Les Falconer (O’Jays, Keb ‘Mo) – Cray fronts a group that is solid, seasoned and vital. The playing is in the moment, and the sound is singular.

The thirteen cuts are selected from the Cray Band’s recording library of 20 releases. Among them are rock radio favorites “Bad Influence” and “Right Next Door (Because of Me),” the soul searing “Love Gone to Waste,” and “These Things,” a bluesy ballad that features one of Cray’s string-bending and mind-blowing guitar solos. The live CD is the fourth Cray Band release produced by Steve Jordan, who plays drums on several cuts. Also guesting are vocalist Kim Wilson and harmonica player Lee Oskar, tenor saxophonist Trevor Lawrence, trumpeter Steve Madaio and saxophonist Tom Scott. 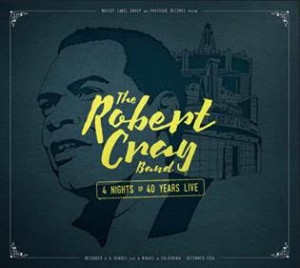 The bonus CD is a revealing glimpse of Cray’s early career and the promise of a future that would reward fans for decades. Selected from the band’s set at the 1982 San Francisco Blues Festival and a 1987 appearance on the Dutch TV Show “Countdown,” the music captures the band’s youthful presence and its ability to revive the blues without abandoning it. Included are favorites from the Cray’s Band 80s set lists; “Smoking Gun” and “Too Many Cooks.”

The 94 minute video in 4 Nights of 40 Years Live is a Cray Band convergence. Coming together are a mesmerizing blend of clips from the San Francisco Blues Festival, the Dutch TV show and the four concerts featured on the first CD. Between clips Cray comments on the band’s history and his personal philosophy of music. There is also behind the scenes footage of the band collaborating with producer Jordan. And putting the Cray Band in perspective are interviews with Eric Clapton, Keith Richards, Bonnie Raitt, Jimmie Vaughan and Buddy Guy each giving their personal response to the music and the man.

It is extraordinary for musicians to thrive over four decades, and the Robert Cray Band is just that, extraordinary. The group has won five Grammy Awards, put 15 studio albums on the Billboard Charts, sold millions of records and toured the globe, playing clubs, concert halls, festivals and large arenas. Whether opening for John Lee Hooker or Eric Clapton, the band has captured audiences with music that is original, a sound that is distinctively rootsy and a performance style that keeps fans flocking back to see the Robert Cray Band headlining. 4 Nights of 40 Years Live is a testament to the band’s past success and proof that the Robert Cray Band is as live as ever.

Dvd track list:
Intro / I Shiver
T-Bone Shuffle
Love Gone To Waste
I Guess I Showed Her
I’ll Always Remember You
Your Good Thing Is About To End
Too Many Cooks
Wrap It Up
Won’t Be Coming Home
Smoking Gun
Sittin’ On Top of the World
Two Steps From The End
Bad Influence
These Things
Right Next Door (Because Of Me)
The Forecast (Calls For Pain)
Time Makes Two