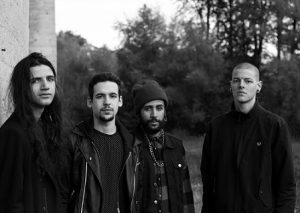 About one year and a half after the release of its debut album ‘Emmersion’, Swiss post-rock/electronics quartet Hubris. (with members of the hip-hop/focu power trio Fensta) just premiered a new song called “Doom Mons” available with the courtesy on Score A/V. This new single will be featured on the upcoming album by Hubris. ‘Apocryphal Gravity’ expected for physical/digital release on spring 2017 through Cold Smoke Records (Devon, Lilium Sova, Ogmasun…)

Hubris. is a Swiss post-rock band originating in Fribourg. Formed in 2014, the instrumental quartet is characterised by their original style which blends an experimental touch of post-rock, electronica atmosphere and some elements of the metal scene.

They draw their inspiration from bands like Jakob, This Will Destroy You, Tides of Man or Jon Hopkins amongst others. With their introspection-evoking style, hubris. reveal themselves with the length of their compositions, permitting an evolution encompassing softness as well as intensity. Sometimes compared with other artists like Sigur Rós or Long Distance Calling (Daily-Rock), the band calls forth emotions of its audience due to a heterogeneous musical landscape mixing poetic ambiance and raw energy. The band is comprised of a guitar and synthesisers (Jonathan Hohl and Martin Volanthen), a bass-guitar (Julien Vonlanthen) and the drums (Nathan Gros).

On the 2nd of May 2015, hubris. released their first opus “Emersion” along-side Jakob (New Zealand). The album was well-received by various medias outlets, obtaining several reviews from webzines and newspaper (La Liberté, La Gruyère) as well as being aired on two radio stations (Radio Fribourg and FarPastPost radio). Furthermore, the album was chosen as the soundtrack of the international museum exposition of Bucarest “Insight”.

In 2016, hubris. entered the walls of the studio “La Fonderie” (Fribourg) in order to compose their second album. Their musical approach took a new turn with the arrival of member Martin Vonlanthen (synthesisers). By drastically changing their method of composing, the band embodies a musical style rarely explored to this day, breaching pre-established post-rock conventions by incorporating electronica influences.