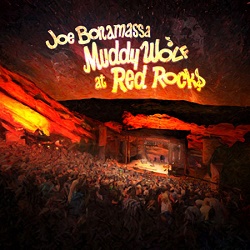 Carved into the bedrock of Colorado’s majestic Rocky Mountains, the famed amphitheater sets the stage for Bonamassa’s fiery delivery of over 2.5 hours of bluesy guitar-wailing and horn-filled tunes honoring the two Blues greats.

Playing to a sold-out crowd of 9,000 fans, this marks the biggest show of Bonamassa’s career, a major milestone for the bluesman. The Blu-ray and DVD contains over 1.5 hours of bonus features including exclusive behind the scenes footage, a photo gallery, historic footage of Muddy Waters and Howlin’ Wolf, and a featurette of Bonamassa and producer Kevin Shirley’s trip to The Crossroads.

The 3LP vinyl includes a downloadcode for the entire performance.