Today, Moribund Records announces January 21st, 2014 as the release date for Apostulum’s highly anticipated second album, ‘Winds Of Disillusion’. Blending the dark atmospheric tradition of scene legends My Dying Bride, Anathema, and Paradise Lost with the razor sharp-edge of modern black metal while retaining a rock sensibility, Apostulum create a bleak sound-picture. Incorporating keyboards as well acoustic grand piano and brass, with such epics as “Unworthiness And Decay” to the massive 18-minute finale “Gleam Of Lucidity,” these Italian dark metal icons show their strength in songwriting and creating atmospheric classics. 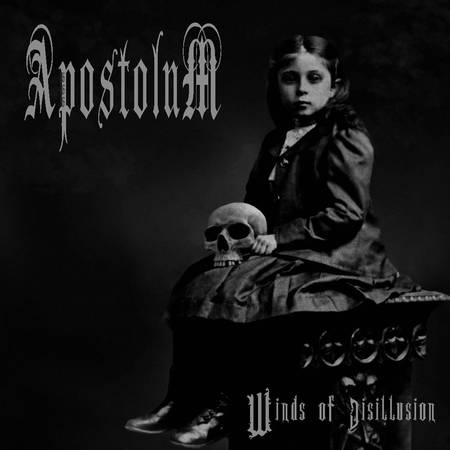 Tracklisting for Apostulum’s ‘Winds of Disillusion’

1. Intro (Light Into The Void)
2. Unworthiness And Decay
3. Higher Planes Of Existence
4. Debris Of Perception
5. Less Than A Step
6. Gleam Of Lucidity

Guitarist Matteo comments: “Musically, the new album is not the result of the choice to move in a direction rather than another; the entire writing process took place in a very spontaneous and natural way. We did not feel the need to make drastic changes to our sound – forcing a change is likely to remove a band from its purest form. Composing so instinctively, I think we approached, as never before, our essence and the songs honestly represent what Apostulum are today. The only things we set from the beginning of the creative process have been the ones to pay greater attention to the arrangements and songs structures, and improve as performers in the knowledge that we can rely on better equipment in the studio.”

Continuing, he reveals, “Lyrically, the album is not a concept, but there is a common element that somehow combines the lyrics of individual songs, which is the current strengthening ourselves to a pessimistic view on the future of the human race and planet earth. Hence, the meaning of the title Winds of Disillusion – the impotence of the human being in front of the occurrence of external destructive natural events together with the inability to suppress the growing of inner feelings of total disillusionment, noting bitterly the inability to be able to remedy a relentless physical and moral decline…a strong emotional wind that sweeps away any hope from the human soul. Ultimately, I believe that Winds Of Disillusion is not only a big step forward compared to Anedonia, but the real Apostulum masterpiece.”