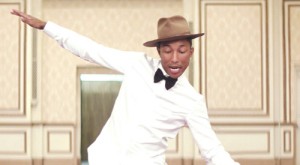 N.E.R.D. created three new songs for the much-anticipated film. The first song, “Squeeze Me,” is available everywhere today via i am OTHER/Columbia, including iTunes and Spotify. In addition, N.E.R.D. has contributed two other songs to be released in the coming weeks, “Patrick Star” and “Sandy Squirrel,” named for two of SpongeBob’s most trusted sidekicks.

Pharrell Williams says reuniting N.E.R.D. was long overdue, with the SpongeBob film collaboration the perfect opportunity for the band to re-emerge, or submerge, in nautical SpongeBob style: “We loved going into studio to make music for this film,” says Pharrell. “I am one of SpongeBob’s biggest fans—can’t wait for everyone to hear the songs.” Adds Shae Haley, “It was a complete honor to be a part of this project. SpongeBob and N.E.R.D. share the same belief that imagination is the key to everything.”

From Paramount Animation and Nickelodeon Movies comes “The SpongeBob Movie: Sponge Out of Water,” an all-new 3D adventure that’s as wild and funny as its name. For the first time, SpongeBob SquarePants, the world’s favorite sea dwelling invertebrate, comes ashore to our world for his most super-heroic adventure yet.

N.E.R.D.’s most recent album, “Nothing,” released in 2010, was the fourth album of their career. The group formed at the dawn of the new millennium, with Pharrell Williams and Chad Hugo of The Grammy nominated production duo, The Neptunes (Pharrell won as producer of the year for The Neptunes in 2006, and again in 2014 as a solo producer) aligning with Shae Haley, and launching their breakthrough, genre-mashing N.E.R.D. debut effort, “In Search Of?,” in 2001. Hailed as an innovative reinvention of hip hop/rock/funk, (‘part Afrika Bambaataa, part Star Trek on ecstasy?’ raved Rolling Stone) the group achieved artistic acclaim.

Pharrell Williams enjoyed great success in 2014 with his worldwide hit “Happy” (which garnered an Academy Award??® nomination), released his second solo album, “G I R L,” which topped the iTunes charts across the globe, and received six Grammy nominations for his outstanding achievement in music.