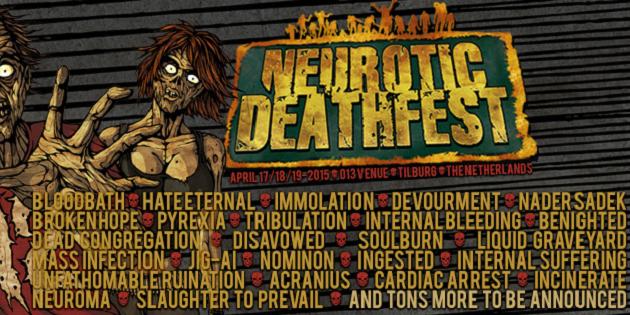 With the confirmation of Obituary, Neurotic Deathfest adds yet another headliner to the already massive line-up of this year’s festival. Originally formed in 1984 in Boston, this United States-based band is considered one of the pioneering bands of the death metal genre. The album ‘The End Complete’ is the bestselling pure death metal album ever in the genre, selling over 100.000 copies in the US and more than a quarter million copies worldwide. Their last album ‘Inked In Blood’ came out in 2014 and is the first album in 5 years. The French bands Kronos and Gorod and Holocausto Canibal from Portugal are also confirmed for Neurotic Deathfest 2015. Despite the already impressive running order, the organization still has to announce more than 15 acts!

These names have all been confirmed for Neurotic Deathfest 2015: