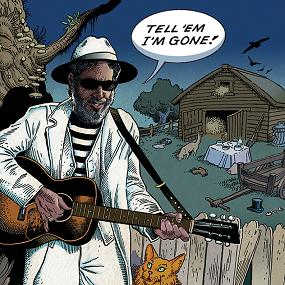 On Monday, November 24, Legacy Recordings will release a special vinyl LP version of ‘Tell ‘Em I’m Gone’ the highly anticipated new album from iconic singer-songwriter and 2014 Rock and Roll Hall of Fame inductee Yusuf / Cat Stevens. The 180-gram LP will be packaged in a beautiful, gatefold jacket and will include an MP3 download card of the full album. Additionally, the first pressings of the LP will include unique, hand-drawn artwork from renowned illustrator, William Stout.

“The album harks back to the great days of R&B and black wax records,” says Yusuf. “The message continues to be relevant in as much as it is a call for Freedom from the bondage we all tend to get caught up in.” Yusuf/ Cat Stevens also announced that he will embark on his first North American tour in over 35 years, giving fans in select cities the opportunity to hear his beloved classics and superb new songs live, many for the first time. The Peace Train…Late Again tour will kick off December 1 at Massey Hall in Toronto and conclude on December 14 at Nokia Theatre LA LIVE in Los Angeles,