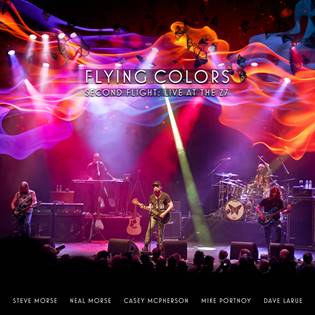 On only the eighth show of their 2014 fall tour, they took to the stage at Switzerland’s storied Z7 venue and captured on film captured a breathtaking live performance. “It was especially exciting because we had just performed many of these songs for the first time, days before,” explains Steve Morse. With their critically acclaimed sophomore album Second Nature out for only a week, the concert recorded an exceptional rarity: band and audience, together, discovering an album for the first time. That freshness is palpable in every frame of this Ultra-HD/Blu-ray/DVD release. With every crowd reaction you are transported there, becoming part of the event.

Flying Colors also explored technological innovation with the album, with unique ways for fans to experience it. Viewers can listen in 5.1-surround from the two best seats in the house: behind the front-of-house soundboard, or right in the front row. In another first, an audio-only version of the concert is available in Headphone Surround, which recreates the front-row surround mix entirely in headphones. The headphone mix will be available in formats up to uncompressed 24 bit / 192 KHz from HD audio distributors, such as Pono. For the warmest sound and highest possible fidelity, every one of the show’s mixes was mastered to 2″ analogue tape, and digitised separately for each audio format, by mix/mastering engineer Rich Mouser (Transatlantic, Weezer).

The audio, itself, underwent a new audio engineering process, Harmonic Phrase Analysis, developed specifically for the show at Manchester Metropolitan University in England. The technology reduces the unwanted processing normally associated with contemporary live recordings, imparting a more organic feel to the sound field. The video was mastered by famed special effects company, Cinnafilm, using their revolutionary Dark Energy technology (IMAX). The result is unparalleled realism from the concert’s 24 cameras, as well as eye-popping Ultra-HD versions of the concert.

‘Second Flight: Live at the Z7′ showcases a new level of musical prowess from the group, captures the candid energy of a new band, and lets fans experience them in innovative ways. It reflects the many hues and colors of the band members’ individual-and collective-unique creative expression. Casey McPherson recounted, “We had a blast playing these tunes and can’t wait for you to hear them… you can feel the excitement!” before going on to joke, “I’m still trying to learn Steve’s guitar parts, though.” It’s Flying Colors at their very best, and a new milestone in the band’s soaring adventure.

The mission was to join virtuoso players, a pop singer/songwriter, and the right producer-to create sophisticated music that was accessible. In 2009, executive producer Bill Evans brought the idea to Morse, Portnoy, Morse, LaRue, and music producer Peter Collins. Having helmed enduring works by progressive artists (Rush, Brian Wilson), as well as mainstream ones (Elton John, Bon Jovi), the renowned Collins was a perfect fit. The band was incomplete, though, even after Evans and Collins considered over 100 singer/songwriters.

Then Mike Portnoy, one night on tour, heard Casey McPherson’s “Colder Months” in rotation on his iPod. McPherson had recently released New Morning (Hollywood Records), dominating the Billboard Top-10 for 17 weeks, and VH1’s Top-20 Countdown for four months. Portnoy realized, soon followed by everyone else, that McPherson brought the perfect tone to Flying Colors.

Second Nature was released in September of 2014, debuting in multiple Top-10 charts, worldwide. In addition to numerous other accolades, the album received a Prog Award nomination for Album of the Year, with Flying Colors being nominated for Band of the Year. Adorned with artwork by Hugh Syme (Aerosmith, Stone Sour, Rush), mixed by prog rock stalwart Rich Mouser, and bookended by two tracks of truly epic stature-“Open Up Your Eyes”, and the anthemic “Cosmic Symphony”-Second Nature was a fitting release for the band’s sophomore outing.

In late 2012, the band toured the United States and Europe, dazzling fans with Flying Colors originals and selections from the catalogues of the five members. ‘Second Flight: Live At The Z7’ is the follow-up to the band’s previous Blu-ray/DVD, the #1 European-charting ‘Live in Europe’, which knocked One Direction out of the Top-10.