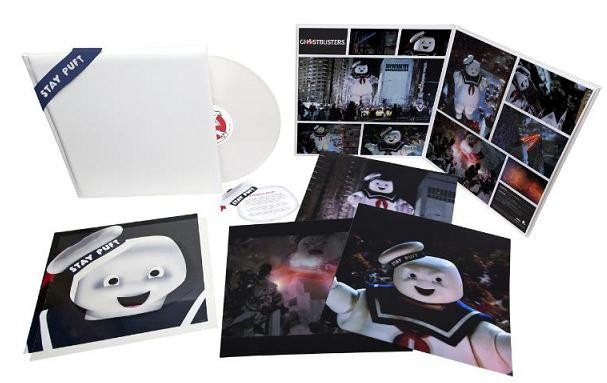 A limited edition version includes one set of Stay Puft Marshmallow Man facial expressions with three individual emotions separated onto layers of unbound transparencies. The set is contained in a clear presentation pouch. “Ghostbusters,” the song recorded by Ray Parker Jr as title track to the groundbreaking 1984 blockbuster comedy starring Bill Murray, Harold Ramis and Dan Aykroyd, became an international crossover hit in its own right, bulleting up to #1 on the Billboard Hot 100 and #1 on the Hot R&B/Hip-Hop Singles charts while going Top 10 on Billboard’s Hot Adult Contemporary chart (#9) and Hot Dance Club Play chart (#6).

The eminently danceable and hook-packed track (“Who ya gonna call? Ghostbusters!”) remains one of the world’s all-time great perennial party anthems. Parker’s track was nominated for an Academy Award in the Best Music, Original Song category. In 1989, Run-D.M.C. recorded a rap for a remixed version of the “Ghostbusters” single used in the “Ghostbusters II” sequel.

Sony Pictures Entertainment is celebrating the 30th anniversary of its blockbuster franchise Ghostbusters with a series of special events and home entertainment releases. As part of this celebration, both Ghostbusters and Ghostbusters II have been remastered in 4K and released in high-def on Blu-ray with all-new special features and are available in stores now.

As an added highlight, the original 1984 film returned to the big screen, in over 700 locations in the United States and Canada, for a limited engagement starting August 29 (Labor Day weekend), while Legacy Recordings has been offering 30th anniversary editions of the movie’s soundtrack on CD, 12″ standard vinyl and a special glow-in-the-dark 12″ vinyl picture disk.