Rob Zombie unleashes 31 – A Rob Zombie Film (Original Motion Picture Soundtrack) today via UMe for download and streaming, with vinyl to follow on April 14, 2017. Produced by Zombie, the 31 soundtrack includes eight exclusive original score compositions he co-wrote and/or recorded with collaborators John Five, Bob Marlette, and Chris “Zeuss” Harris, and well-known tracks by other artists, including James Gang, Lynyrd Skynyrd, and The Mamas And The Papas. Throughout the soundtrack, Zombie has interwoven the music with gripping narrative clips from the terrifying film, which will be released on home video on December 20 (Lionsgate). 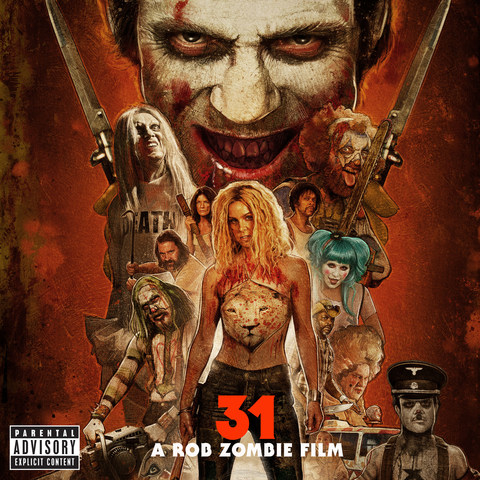 Zombie’s seventh feature film, 31 made its world premiere at Sundance Film Festival before its theatrical release on September 1. From the visionary mind of the man who brought us House of 1000 Corpses, The Devil’s Rejects and Halloween springs the horrific story of five carnival workers who are kidnapped the night before Halloween and held hostage in a large compound. At the mercy of their captors, they are forced to play a twisted game of life or death called 31. For the next 12 hours they must fight for their lives against an endless parade of homicidal maniacs.