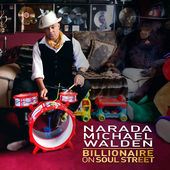 Marking his now 40th Anniversary in the music industry, Narada was recently honored by Billboard Magazine as one of the Top Ten Producers of All-Time, and now Billionaire On Soul Street has already garnered rave reviews worldwide.

Narada reveals, “This song Billionaire on Soul Street means the world to me because it reflects my personal feeling of spirituality and that feeling renewed for life by having my children Kelly and Kaylah in my life and my wife Katie. Having children now at this time in my life really has touched my heart to feel like ‘WOW! Look how lucky and how blessed I am by God.’ So I used this slogan, cause’ I feel so good, like a Billionaire on Soul Street!”

Narada and his band will perform a series of shows across the United States in the next few months in support of the new single release and his upcoming album.