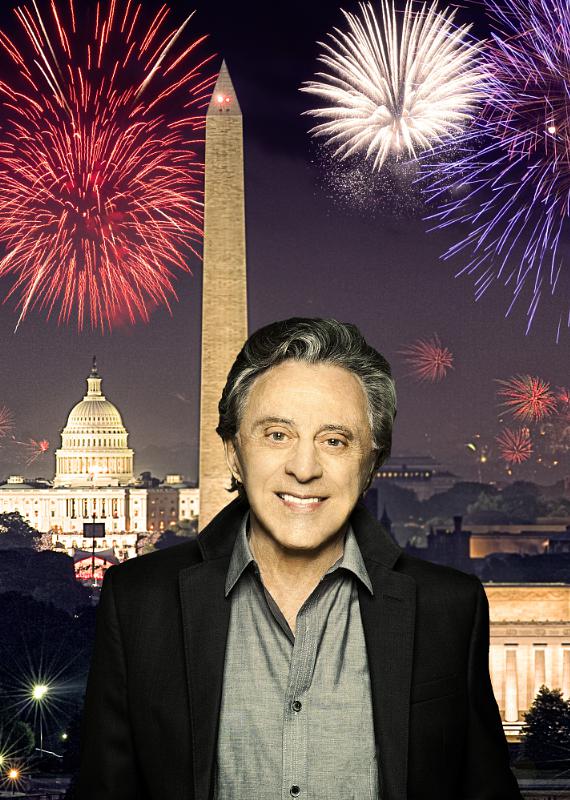 PBS’s A CAPITOL FOURTH is thrilled to announce that legendary singer Frankie Valli will perform at the live concert event celebrating the nation’s 238th birthday on July 4. America’s National Independence Day celebration, broadcast from the West Lawn of the U.S. Capitol, puts viewers front and center for an all-star salute topped off by the greatest fireworks display anywhere in the nation.

With his signature falsetto voice and countless hits, Frankie Valli is an American icon who transcends generations. Thanks to the success of the Tony-winning musical, Jersey Boys, which chronicles the life and times of Valli and his legendary group, such classic songs as “Big Girls Don’t Cry,” “Can’t Take My Eyes Off of You,” “Sherry,” and “My Eyes Adored You,” are the rage all over again. The musical has taken Broadway by storm and currently six companies perform Jersey Boys nightly from Las Vegas to London and is entering its 9th year and is the 13th longest running show in Broadway history. In the meantime, the real Frankie Valli is packing venues around the world.

Valli has been successfully touring and making music for more than fifty years now, both as a solo artist and as the lead singer of The Four Seasons. Valli’s first taste of national exposure came in 1962 when he and The Four Seasons performed their single “Sherry” on American Bandstand. The performance took the nation by storm propelling the group to their first #1 record and making them a household name. The hit train continued to roll for The Four Seasons in 1963 and 1964 as they went on to produce several more #1 hits.

After much success with The Four Seasons in the first half of the ’60s, Valli released his first solo effort in 1967, Frankie Valli: Solo. The album contained the mega hit “Grease.” He would go on to produce nine Top 40 hits and two #1 singles.

Valli has even dipped into the acting pool having appeared on the iconic HBO series The Sopranos as mobster Rusty Millio and more recently in the Rob Reiner film, And So It Goes, set for release this July. The highly-anticipated film adaptation of the musical Jersey Boys, is also set to be released on June 20, and is directed by Clint Eastwood.

Frankie and the Four Seasons have influenced many other great recording artists. The group has been inducted into the Rock and Roll Hall of Fame and to date have sold over 100 million records. Valli continues to perform before sell-out crowds and from all the recent success including his first studio album in 15 years, Romancing the ’60s, Frankie Valli is as big as he was in 1962 and not looking to hang up the microphone anytime soon.

A CAPITOL FOURTH airs on PBS Friday, July 4, 2014, from 8:00 to 9:30 pm ET (check local listings) before a concert audience of hundreds of thousands and millions more at home as well as to our troops serving around the world. Two-time Emmy Award-winning television personality Tom Bergeron returns to host the star-spangled celebration of our nation’s birthday. The full line-up will soon be announced.