Megadeth, Motörhead, and Anthrax – three of the greatest heavy metal bands in the world – will perform at the first annual Motörhead’s Motörboat cruise onboard the Carnival Ecstasy from September 22-26, 2014. In addition to these three rock giants, “The Loudest Boat In The World” will also feature performances from Zakk Wylde, Jim Breuer, Danko Jones, Fireball Ministry, Wilson, and some big surprises…more bands to be announced soon. 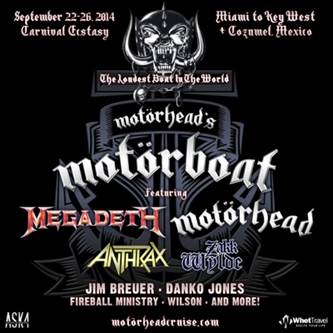 Motörhead’s Motörboat will sail from Miami, visiting the ports of Key West, Florida and Cozumel just off Mexico’s Yucatan Peninsula. While onboard, guests will have a once-in-a-lifetime opportunity to interact with band members and will see unforgettable performances on various stages throughout the ship.

Motörhead founder Lemmy Kilmister proclaims, “This will be everything you’ve come to expect from a night out with us, except even louder, with more great bands and no way of escaping! If you thought waves could rock a boat, you’ve got another thing coming with this lovely little outing!”

Megadeth’s Dave Mustaine says, “There never has and never will be another cruise like Motörboat cruise. Come on a thrashing voyage with Motörhead, Megadeth, Anthrax, Zakk Wylde and all Lemmy’s friends. This is the coolest way to ever see a metal concert.”

“It’s truly an honor to partner with one of the most iconic bands in rock music to deliver a one of a kind fan experience for ‘Motorheadbangers’ from around the globe,” says event producer Alan Koenig of ASK4 Entertainment.

Motörhead–the world’s biggest and baddest rock & roll band of all time–released their mammoth 21st studio album Aftershock in October 2013. Aftershock is one of Motörhead’s best-selling and highest-charting albums in 20 years, debuting at #22 on the Billboard 200. Through tenacity, hard work, and a deep-seated ability to produce an original, face-melting sound, Motörhead–Lemmy Kilmister (bass, vocals), Phil Campbell (guitar) and Mikkey Dee (drums)–has become one of the most popular bands in the world with a fanbase that is second to none. www.imotorhead.com

In a career nearing 30 years, heavy metal titans Megadeth have sold more than 38 million albums worldwide, earning five consecutive platinum albums and numerous accolades along the way, including 11 Grammy nominations. The band’s latest studio album, Super Collider, features vocalist/guitarist/founder Dave Mustaine once again reunited with guitarist Chris Broderick, bassist David Ellefson, and drummer Shawn Drover. Released in June 2013, Super Collider debuted at No. 6 on the Billboard 200, Megadeth’s highest chart debut since 1994’s Youthanasia. In April, Megadeth is set to embark on a world tour in over 25 countries across four continents. The tour follows a first-ever performance at Copley Symphony Hall on April 12, where Dave Mustaine will collaborate with the San Diego Symphony. www.megadeth.com

Since the September 2011 release of Worship Music, five-time Grammy-nominated Anthrax has experienced a tremendous comeback. “Classic era” vocalist Joey Belladonna rejoined the lineup in the spring of 2010, fronting for the band on The Big Four shows across Europe, at NY’s Yankee Stadium and at the SoCal Coachella site. In 2012, Anthrax–Joey Belladonna (vocals), Scott Ian (guitar), Charlie Benante (drums) and Frank Bello (bass)–became the first metal band to have its music played on Mars when its “Got The Time” was chosen by NASA to wake up the Mars Rover. The band is currently writing and demoing new material for the follow up to Worship Music that is expected out late 2014/early 2015. www.anthrax.com