Prince & 3RDEYEGIRL took over the world’s most famous jazz club, Ronnie Scotts in London, on the latest stop on their month long tour. In an unexpected move Prince changed up the musical presentation to fit the iconic Soho venue, playing a two hour set that encompassed Jazz and Funk, switching gears from the rock shows that he and the band have played on the tour thus far. Prince and co played to a crowd who had been queuing since 6AM as well as some iconic faces including London’s own, Cara Delevigne and musical legends Noel Gallagher and Nile Rogers. 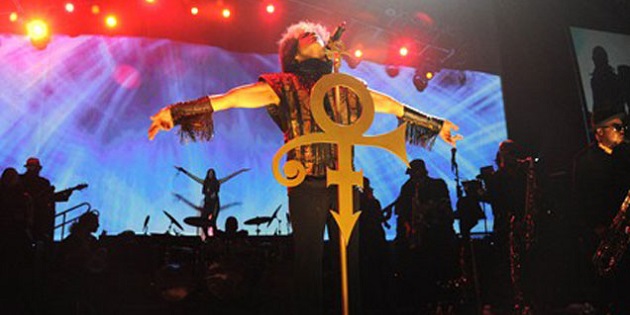 Taking the stage at Midnight, Prince took to the piano to play an instrumental jazz funk set, joined by his brand new all-female band 3RDEYEGIRL (guitarist Donna Grantis, bassist Ida Nielsen and drummer Hannah Ford Welton). The band more than held their own with the musical legend, proving that they have serious jazz and funk chops as well as their proven heavy rock skills. They were joined on stage by special guest saxophonist Marcus Anderson.

Prince not only changed musical gears but presented a totally different setlist to the previous shows on the ‘Hit and Run’ tour with a mix of catalogue classics and surprises which included seriously funky versions of ‘Take Me With U’ and ‘Raspberry Beret’. Taking his place at the piano Prince opened the first encore with ‘Diamonds and Pearls’ joined in part by the audience who took the chorus! He also thrilled with versions of ‘The Most Beautiful Girl in the World’ and ‘How Come You Don’t Call Me Anymore’ solo at the piano before bringing the band back to close the night a jazz rock version of ‘Something in the Water’, dropping in The Waterboys ‘Whole of the Moon’ and closing with ‘Purple Rain’. After a short patron changeover, Prince and the band graced the stage for a second set, ensuring more eager fans were able to witness the music icon and his new group in this special setting.

The show was the latest in Prince and 3RDEYEGIRL’s spontaneous ‘Hit and Run’ tour of London following history making performances at the Electric Ballroom, Shepherds Bush Empire, Kings Place and Koko. The group has been showered in 5-star reviews from all major reviewing media.