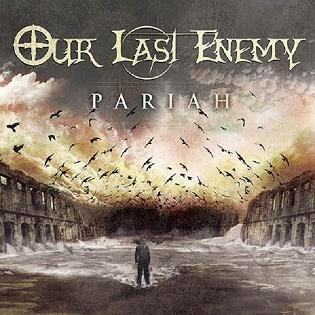 Hard-hitting Australian industrial metal band Our Last Enemy will release their brand new, post-apocalyptic concept album ‘Pariah’ on March 11, 2014 via Eclipse Records. ‘Pariah’ is produced by none other than Christian Olde Wolbers, formerly of Fear Factory, which won’t come as a shock to anyone after they take a listen to the band’s new track ‘Devour The Sun’, available for streaming now exclusively via CraveOnline.com here. While there, make sure to enter to win a brand new ESP LTD guitar, signed by the band! The prize pack also comes with a signed poster, signed glossy photo, signed copy of Pariah, and an Our Last Enemy logo t-shirt. Interesting fact: ‘Pariah’ was recorded at Temple studios, once owned by members of Fleetwood Mac and currently co-owned by Cypress Hill’s B-Real and Raymond Herrera of Fear Factory fame.

Although beginning in 2006, the band has evolved to their current line-up of Oliver (vocals), Jeff (keys/samples), Matt (bass), Bizz (guitars) and Zot (drums). Bizz was once a member of Genitorturers, a visual metal band that also featured Morbid Angel’s David Vincent; he relocated Down Under to join Our Last Enemy. Through the years, Our Last Enemy has enjoyed their last album Fallen Empires going # 1 on the iTunes Metal Chart in their native country, while their song ‘10,000 Headless Horses’ was featured in the Rock Band video game. They’ve played support gigs for the likes of Static-X, Dope, Fozzy, Mnemic, Hanzeul Und Gretyl and more.