Toto has revealed plans for 2014 that deliver what fans have been waiting years for. The band will record a new studio album, their first since Falling In Between (2006). Keyboardist and founding member David Paich shares, “The repertoire is coming together so naturally it is as though we never took a break from creating as Toto in the studio. For the fans who have been waiting patiently and continually showing the band support and love over the last decade or so, this one’s for you. Collectively we can’t wait to share these recordings with The World.” 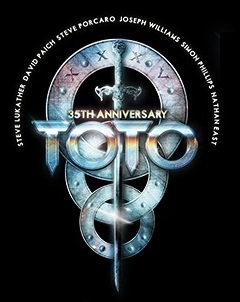 Late-Spring or Early-Summer, Toto 35th Anniversary: Live In Poland will be issued via Eagle Rock with configurations that include CD, DVD, Blu-ray and a deluxe package which will be revealed imminently. Filmed on June 25, 2013 in Lodz, Poland, the offering captures the band in the midst of a standing-room-only European tour. The two-hour plus performance features the band’s hit stocked repertoire alongside other favorites.

This April, Toto returns to Japan for a seven show headlining arena tour that takes them through Nagoya, Osaka, Tokyo, Sendai and Sopporo. The complete itinerary follows below. In August and September, the band will hit the road as co-headliners with Michael McDonald, for their most comprehensive North American tour in years.

It has also been announced that long-time member drummer Simon Phillips will be departing the band to pursue his solo career and other interests. Luke shares, “He is still a dear friend and we wish him the very best and continued success,” The band welcomes new addition Keith Carlock (Steely Dan, Sting, Eric Clapton, Steve Winwood). Carlock originally hails from Clinton, Mississippi, and has collaborated with Luke in the past in the jam band Toxic Monkey.

Few ensembles in the history of recorded music have individually or collectively had a larger imprint on pop culture than the members of Toto. As individuals, the band members’ imprint can be heard on an astonishing 5000 albums that together amass a sales history of a HALF A BILLION albums. Amongst these recordings, NARAS applauded the performances with more than 200 Grammy nominations. Band members have been South Park characters, and Jimmy Fallon and Justin Timberlake recently did a comedy sketch around the band’s hit “Africa.” As a band, Toto sold 35 million albums, and today continue to be a worldwide arena draw staging standing room only events around the globe. They are pop culture, and are one of the few 70’s bands that have endured the changing trends and styles, and 35 years in to a career enjoy a multi-generational fan base.

In 2013, the band’s European tour hit 29 cities staging successful concerts Belgium, Luxembourg, Germany, France, Netherlands, Italy, Switzerland, Poland, Denmark, Sweden, Norway, and Finland. Toto World Tour 2013 featured Luke, David Paich, Steve Porcaro on keyboards, and singer Joseph Williams, who sang the hits “Pamela” and “Stop Loving You” on the worldwide platinum release The Seventh One (1988). Williams is also featured on the platinum certified Fahrenheit (1986), Toto XX (1998), the track “Bottom of Your Soul” on Falling In Between (2006), and the multi-platinum release Past to Present 1977-1990 issued in 1990.

With over 35 years together and thousands of credits and accolades to their names, Toto remains one of the top selling tour and recording acts in the world. Collectively and individually, the band has played on nearly every major hit record of the past quarter century, placing their distinctive stamp of excellence all over CD shelves around the world. Toto are the benchmark by which many artists base their sound and production, and they continue to transcend the standards set by the entire music community, being simply synonymous with musical credibility.

TOTO also continues to raise awareness for ALS, for their brother and friend, Mike Porcaro, who has been diagnosed with ALS, Lou Gehrig’s Disease. The band commits energies towards fundraising for Police and Fire Departments of California and the Fallen Heroes initiative, and help the United Nations in their humanitarian endeavors through music.