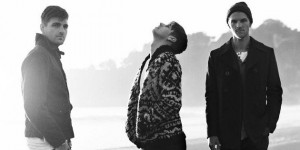 Foster The People are set to release their highly anticipated new album, Supermodel , on March 18 via Columbia Records. Produced by Paul Epworth, the globally influenced Supermodel is the follow-up to the group’s critically acclaimed 2011 debut Torches.

Recorded in various locations around the world, Supermodel began as frontman Mark Foster and producer Paul Epworth set up a writing studio in a riad in Essaouira, Morocco at the end of 2012. “We didn’t have any rules. We just created as much as we could in seven days,” Foster recalls, “And in the spirit of wanderlust and discovery we ended up stumbling on the musical identity of what this record was going to feel like.”

From Morocco the album continued to migrate with Foster and the band. Work continued at Woodshed Studios in Malibu, Henson Studios and Bronson Island in Los Angeles and was finished at Epworth’s Wolf Tone Studios in London.

Supermodel will be available for pre-order beginning Tuesday, January 14 and will include an instant download of the album’s first single “Coming Of Age” at fosterthepeople.com and select digital retailers (see full track listing below). Fans can also listen to “Coming Of Age” now on the band’s website, where the song is set to a visual documenting the creation of a mural inspired by the new album. The mural lives on a building in downtown Los Angeles and, at seven stories tall, is one of the largest painted murals in the United States.

To celebrate the announcement of Supermodel , Foster The People have confirmed two intimate club dates in Seattle and Portland on January 19 and 20. Tickets for both shows go on sale at 1:00p.m. PT/4:00p.m. ET today at fosterthepeople.com. The band is also confirmed to perform at the Coachella Valley Music and Arts Festival in Indio, CA on April 12 and 19.

Foster the People is Foster, Cubbie Fink and Mark Pontius. Founded by Foster in 2009, the group achieved success with the 2011 release of their debut album Torches, which has sold nearly 2 million albums and over 9 million singles worldwide. Torches features the #1 hit single “Pumped Up Kicks,” which was declared “the year’s anthem” by SPIN, and also spawned the chart topping singles “Don’t Stop (Color On The Walls),” “Houdini,” and “Helena Beat.” Foster the People garnered three GRAMMY nominations for their monumental debut, including Best Alternative Album, Best Pop Duo/Group Performance for “Pumped Up Kicks” and Best Short Form Music Video for “Houdini.”

SUPERMODEL TRACK LISTING:
1. Are You What You Want to Be
2. Ask Yourself
3. Coming of Age
4. Nevermind
5. Pseudologia Fantastica
6. The Angelic Welcome of Mr. Jones
7. Best Friend
8. A Beginner’s Guide to Destroying the Moon
9. Goats in Trees
10. The Truth
11. Fire Escape