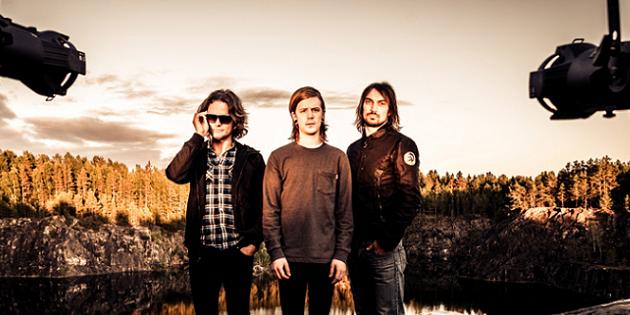 Scandinavian power trio Truckfighters will release its fourth studio Longplayer Universe on January 24 via band’s very own label, Fuzzorama Records. The spectacular Swedish band, who Queens of the Stone Age front man Josh Homme has called “not just the best band I’d ever heard, but the best band that ever existed” and who has created some of the best stoner rock records of the last decade, describes the new album as simply “the ultimate fuzz.” Universe supercharges the riff-heavy roots of Truckfighters’ signature sound while charting a more progressive, challenging path — a hybrid of fuzz and prog — with an increased focus on textures and dense arrangements loaded with engaging melodies and outstanding musicianship. These advancements don’t come at the expense of the catchy and heavier aspects of the group’s sound, rather it shoots Truckfighters psychedelically-tinged rock into rich and rewarding new dimensions.

Truckfighters resurrect the spirit of the decibel-heavy 1970’s to stunning effect. Formed in 2001, the band — Oskar “Ozo” Cedermalm (vocals/bass), Niklas “Dango” Källgren (guitar) and Andre “Poncho” Kvarnström (drums) — is an absolute force in the live setting, thrilling audiences worldwide by packing a dozen bands worth of energy into each and every performance. Ever since, Truckfighters have completed numerous giant European tours, toured South America, Eastern Europe, Australia, but also completed three full U.S. runs, winning over new fans at every turn with an exhilarating show built for arenas yet executed in small clubs. The high-energy trio has been called “an appealing mix of fuzz-wreathed boogie and heavy-lidded hooks” by Time Out New York, “unbelievable” by the Philadelphia City Paper, “righteously-riffed” by the Aquarian Weekly and “fuzz, pedal-soaked, psych-rock-influenced stoner-metal rock-and-roll that should whip fans who like artists such as Kyuss, Orange Goblin, Wolfmother and Pentagram into an immediate frenzy” by the Dayton City Paper. When the trailer for the recent “fuzzomentary” about the band, titled “Truckfighters” hit the internet, the band found an instant buzz. The film included cameo appearances and quotes from influential musicians such as Homme, Nick Oliveri and Alfredo Hernandez (Kyuss, Yawning Man) and bands like Fu Manchu, Valient Thorr, Witchcraft and Graveyard all singing the bands praises.

Truckfighters will tour the world extensively this year in support of Universe, bringing its explosive energy and contagious enthusiasm to as many cities and stages as possible. The album launch will be followed by a first major city European run in February and March of 2014, before heading for the US, including SXSW festival appearances and more. The “Tour of the Universe” will stop in these European cities on its winter 2014 part: