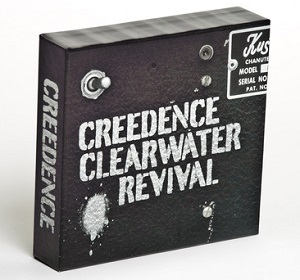 Even the most in-depth exploration of Creedence Clearwater Revival’s Fantasy Records catalog wouldn’t necessarily reveal that they hailed from the Bay Area. Their glorious brand of stripped-down roots rock seemed to emanate straight from the murky swamps of Louisiana and smoky juke joints dotting the outskirts of Memphis, with a fierce musical attack that was raw and primal. CCR was one of the most important and commercially popular bands of the late 1960s and early ‘70s, defined by John Fogerty’s whipsaw vocals, slashing lead guitar, and prolific muse. Their seminal albums for Fantasy Records (six platinum, the other gold) are loaded with timeless hits.

Set for reissue on November 11, Creedence Clearwater Revival: 6-CD Boxed Set contains everything the rockers cut in the studio for Fantasy from 1967 to 1972—their seven studio albums (Creedence Clearwater Revival, Bayou Country, Green River, Willy and The Poor Boys, Cosmo’s Factory, Pendulum, and Mardi Gras) packed with smashes (“Proud Mary,” “Bad Moon Rising,” “Down On The Corner,” “Fortunate Son,” “Green River,” “Travelin’ Band,” “Up Around The Bend,” “Lookin’ Out My Back Door”). There’s nearly a disc-and-a-half of live material from concerts at the Oakland Coliseum and across the European continent as well, proving that CCR was as explosive onstage as within the confines of the studio.

Also on board are 25 1961-1967 rarities from the days when John, his brother Tom (on rhythm guitar and some lead vocals), bassist Stu Cook, and drummer Doug Clifford did business as Tommy Fogerty & the Blue Velvets and then the Golliwogs. These hard-rocking garage band gems, collectors’ items all, comprise the entire first disc of this box.

The big difference between this edition of the CCR box and its acclaimed 2001 predecessor is its sleeker, highly attractive packaging. The artwork highlights the band’s strong affinity for Kustom amplifiers, paying clever tribute to their gritty garage rock roots in the process. Its “amplified” cover looks like a Kustom rig; prominently featured elsewhere is a photo of John and Doug sharing an onstage high-five with one of those distinctive amps in the background. It’s featured on the inner sleeve of each disc, divided into six sections. When laid out together in the correct order, those six individual sleeves create the full photograph. The joyous image is as powerful as the music itself.