The very last concert in the European leg of the 20 Years Paranoid tour by Garbage felt like a big celebration. Not only the band was celebrating the 20th anniversary of their seminal album Version 2.0, released in 1998, but also the end of a very successful beginning of tour with the feeling of mission accomplished. And the audience was lucky enough to see the band during a very special night, where Shirley Manson and her band colleagues rejoiced at the great tour in their very debut at Utrecht, The Netherlands. 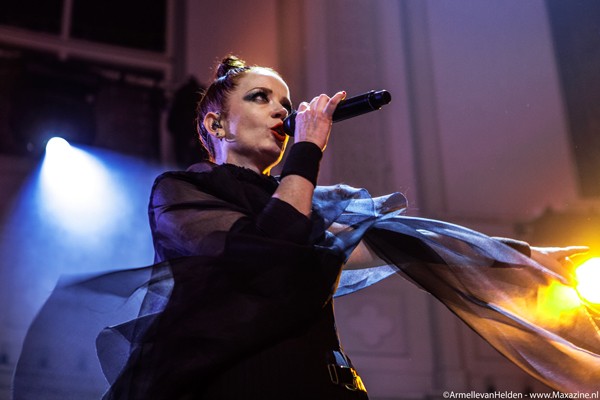 An unaware fan would expect the band to play safe and rely solely on the biggest hits of the album – and they’re many – to captivate the audience. But Garbage is not your ordinary veteran band that will offer no challenge to the fans, and the proof came with the choice of the very first songs of the setlist: ‘Afterglow’ and ‘Deadwood’. Two b-sides gorgeously crooned by Shirley Manson, they were followed by ‘Temptation Waits’, the opener song of the celebrated album. A rendition of ‘Wicked Ways’, with snippets of Depeche Mode’s ‘Personal Jesus’, was the very first surprise of the night and certainly made some fans wonder how dashing a duet between Shirley Manson and David Gahan would sound like.

The rest of the concert brought to a very engaged audience a mix of the album’s major hits such as ‘When I Grow Up’, ‘I Think I’m Paranoid’ and ‘Push It’ with some very well curated b-sides (‘Lick the Pavement’, ‘Soldier Though This’) and other songs released at the end of the 90s (007’s theme song ‘The World is Not Enough’). With a delighting stage presence and enormous charisma, Shirley Manson enchanted the audience with her energetic moves and defiant look while band colleagues Butch Vig, Duke Erikson and Steve Marker delivered every song with great arrangements and the usual competence. The stage had some very climatic lightning effects, while the intervals between songs were filled by interludes and famous movies’ quotes, showing the efforts of the band to deliver a very special experience to an audience that was clearly reviving some very special years.

In the very end of the night, after delivering an amazing performance of one of their most representative songs, ‘The Trick is to Keep Breathing’, the band broke the pledge of looking solely to the past and decided to come to the present with one of their latest singles, the dystopic ‘No Horses’ – a beautiful and powerful tune to remind fans of the consequences of not being vigilant in times of repression and greed. Following such strong statement, ‘Cherry Lips’, a beautiful homage to the LGBTQ+ fans who supported and inspired the band through years, closed the night with the crowd singing out loud its very catchy chorus.

After their last concert of the European tour, it’s fair to say Garbage delivered their best to a very excited and nostalgic audience, who was clearly happy to hear the tunes they cherished in the past, but also looking forward to celebrating the band’s present and whatever their future might look like.

The Trick Is to Keep Breathing
No Horses
Cherry Lips (Go Baby Go!)