Showcasing the musical chemistry shared by Miles and Trane, The Final Tour: The Bootleg Series, Vol. 6 offers five of the best recorded shows from that pivotal 1960 tour (Coltrane’s last as sideman): two shows from Paris’s L’Olympia Theater on Monday, March 21; two shows from the next night at Stockholm’s Konserthuset; and one from Copenhagen’s Tivolis Koncertsal three days later, on March 24. 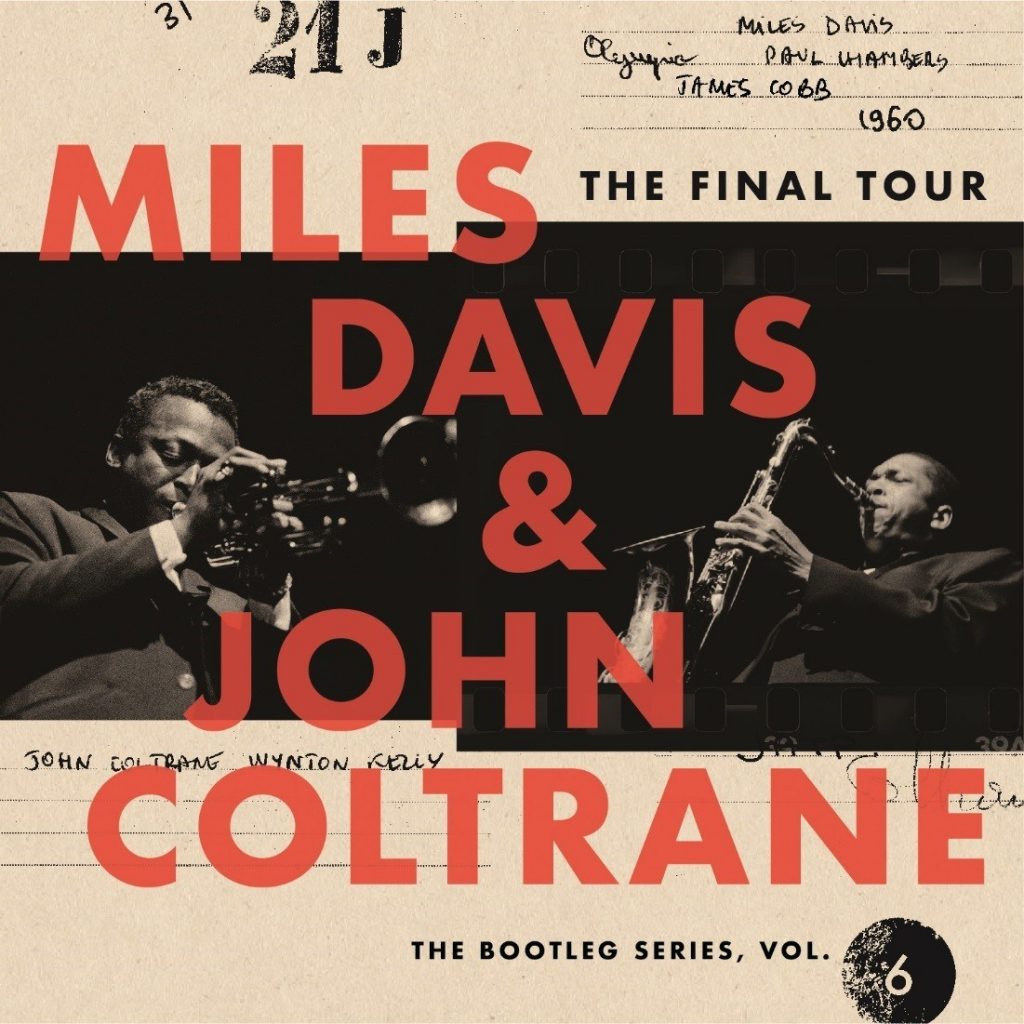 The box set was produced by the multi-Grammy winning team of producers Steve Berkowitz, Michael Cuscuna and Richard Seidel. And mastered by multi-Grammy winning Sony Music engineer Mark Wilder. The set is authorized for official release by the Miles Davis Estate, the John Coltrane Estate, and Columbia Records/Legacy Recordings.

Miles Davis and John Coltrane were each implementing their own jazz revolutions at the time these recordings were made and the electrifying sonic frisson produced by the sometimes-competing/sometimes-intertwining musical visions of the artists perplexed contemporary jazz fans–many of whom were just getting acquainted with the recently-released and now iconic Kind of Blue.

“Much happened on that 1960 tour onstage and off, including powerful, emotionally charged performances in which one can hear the swinging, divergent energy of a band, and the unfiltered reactions of the European audiences: the crowd responses are indeed an inherent part of these historic performances,” writes Grammy Award®-winning music historian Ashley Kahn in his in-depth revelatory liner notes penned especially for this collection. “The common judgement on this music is that it represents a great jazz ensemble audibly straining to hold itself together…An equally convincing interpretation of the 1960 situation is that Miles and his quintet were redefining what a great band could sound like, and how much music it could contain—at one time, in one concert, even in one tune. It’s not that the bandmembers were so much apart, but rather that each were more themselves within the same unit—that divergence could co-exist and make music together.”

The  repertoire performed in this collection is a veritable Miles Davis “Greatest Hits” including ” ‘Round Midnight”, “Bye Bye Blackbird”, “On Green Dolphin Street”, “Walkin’ “, “All Of You” and “Oleo”, all of which he had made his own and had been performing for some time. As well as more recent additions to the repertoire which were composed by Davis – “So What” and “All Blues” —  both from Kind Of Blue.

The Final Tour is essential listening, an invitation to travel through time to experience the enduring beauty and magic of Miles and Trane at the peak of their collective powers. The ensemble includes Miles Davis (trumpet), John Coltrane (tenor sax), Wynton Kelly (piano), Paul Chambers (bass), Jimmy Cobb (drums), all of whom had been performing together since the Kind Of Blue album.

The Final Tour closes with a rare contemporaneous audio interview with John Coltrane (conducted by Swedish deejay Carl-Erik Lindgren). “Do you feel angry?,” asks Lindgren. “No, I don’t,” says Coltrane. “I was talking to a fellow the other day, and I told him, the reason I play so many sounds, maybe it sounds angry, I’m trying so many things at one time. I haven’t sorted them out.”

Originally broadcast on European radio in March 1960, these concert recordings have been long sought after and prized by collectors and are now officially available at last as the latest installment in Columbia/Legacy’s acclaimed Miles Davis Bootleg Series.

For 12″ vinyl collectors and audiophiles, Columbia/Legacy will release The Final Tour: Copenhagen,March 24, 1960 as a single 12″ vinyl album.

The first five volumes of The Miles Davis Bootleg Series have enjoyed numerous honors and accolades:

Live in Europe 1967: The Bootleg Series Vol. 1 (released September 2011) was the most acclaimed historic jazz box set of 2011, receiving a “5-star” review from Down Beat magazine, where it was voted Historical Album of the Year in the Down Beat 2012 Readers and Critics Poll.  The album was ranked #1 reissue in the Readers Poll of JazzTimes magazine while the Jazz Journalists Association voted it Best Historical or Boxed Set.  The set peaked at #3 on Billboard’s Top Jazz Album Charts.

Miles Davis Quintet – Live In Europe 1969: The Bootleg Series Vol. 2 (released January 2013) won the Jazz Journalists Association Historical Record of the Year, voted Historical Album of the Year in the Downbeat Readers and Critics Poll, and #1 reissue in both the Critics and Readers polls of JazzTimes magazine. Like its predecessor, the album also peaked at #3 on Billboard’s Top Jazz Album Charts.

MILES DAVIS AT NEWPORT 1955-1975: The Bootleg Series Vol. 4 (released March 2015) was voted the #1 Historical Reissue in the 2015 JazzTimes Critics Poll and won Historical/Reissue/Vault Release in the 2015 JazzTimes Readers Poll. The set was also named in Downbeat’s “Best Albums of 2015” list, received 4 Stars in the Historical category and in Downbeat’s Critics Poll was the winner in the Historical Album category. The set won the 2016 NAACP Image Award for the Outstanding Jazz Album category.