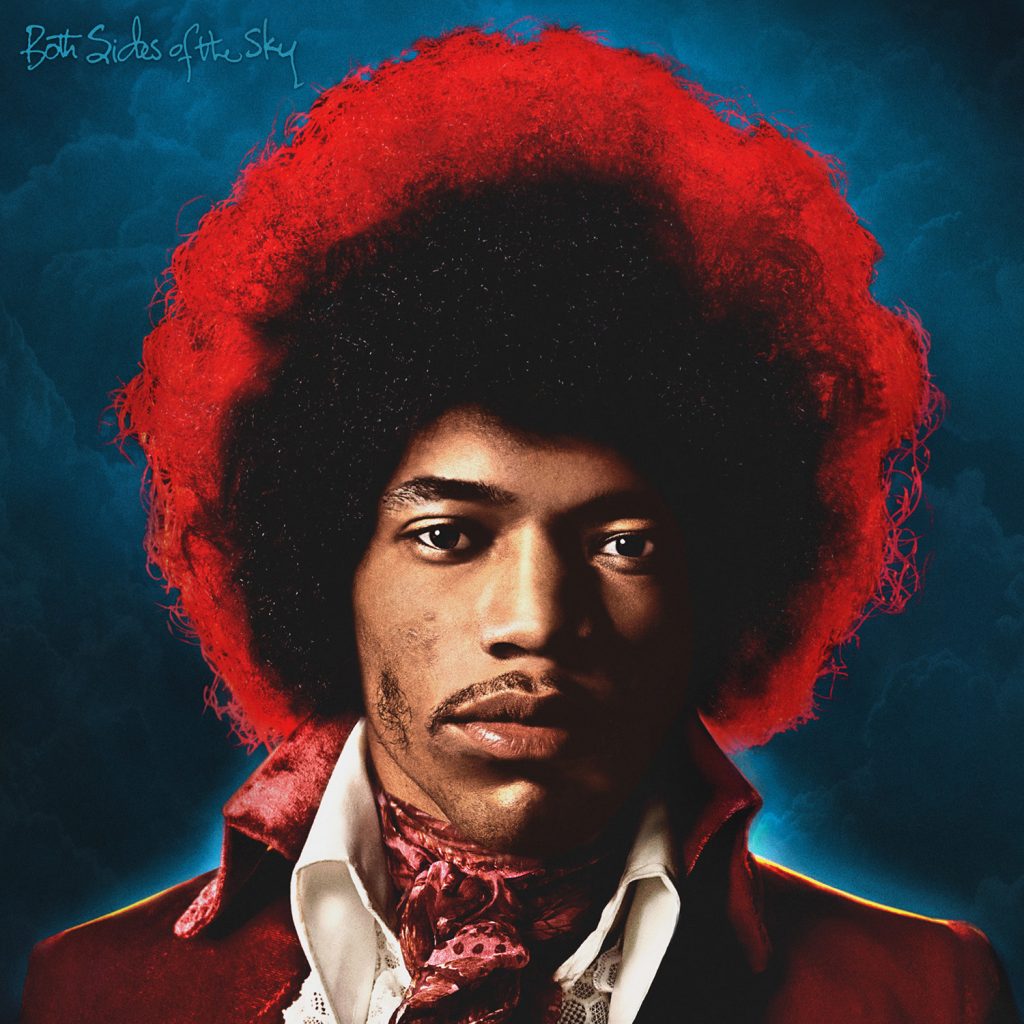 On March 9, Experience Hendrix and Legacy Recordings, the catalog division of Sony Music Entertainment, proudly release Both Sides of the Sky, a dynamic new Jimi Hendrix album featuring 13 studio recordings made between 1968 and 1970—10 of which have never before been released. The album will be released on multiple formats including CD, digital, and as a numbered 180 gram audiophile vinyl 2LP.

Both Sides of the Sky is the third volume in a trilogy of albums intended to present the best and most significant unissued studio recordings remaining in the music legend’s archive. Beginning with Valleys of Neptune (2010), which earned top ten sales rankings in fifteen countries (including a top position of #4 on Billboard’s Top 200 Album Chart), followed by People, Hell and Angels (2013) which peaked on Billboard’s Top 100 album chart at #2. Billboard’s coveted number one singles ranking went to “Somewhere,” the album’s lead track and the legendary guitarist’s highest ever US singles chart achievement. This third release is anticipated to complete the spectacular recording event in epic fashion. “Since Experience Hendrix began its restoration of the Jimi Hendrix music catalog in 1997, our goal has been to present these important recordings to Jimi’s fans in the best possible quality. We are excited about achieving that. We’ve also been intent on generating album releases which present this amazing music in its proper context,” explains John McDermott, one of the album’s co-producers, together with Janie Hendrix and Eddie Kramer.

Recorded between January 1968 and February 1970, Jimi’s desire to push the boundaries of blues music can be heard throughout. Both Sides of the Sky additionally highlights Jimi’s mastery of studio production and his increasing use of these facilities as a proving ground for new sounds, material, and techniques. Many of the album’s tracks were recorded by the trio that would come to be known as Band of Gypsys: Jimi on guitar and vocals, Billy Cox on bass, and Buddy Miles on drums. For their first-ever recording session on April 22, 1969, Hendrix turned to their shared musical root, delta blues. Their previously unreleased, uptempo reworking of Muddy Waters’ “Mannish Boy” opens the album and sets the tempo for what follows. “Lover Man” was a favored Hendrix original and the guitarist was determined to realize a finished master. Previous attempts by the original Experience had yet to yield this for Hendrix but this December 1969 effort by the Band Of Gypsys — complete with its homage to the popular Batman theme song—was his strongest effort to date.

“Hear My Train A Comin'” features drummer Mitch Mitchell and bassist Noel Redding from the original Jimi Hendrix Experience. This original blues composition had become a staple of Hendrix’s concerts. This previously unreleased April 1969 recording captured the furious power and dynamic tension that made the song so memorable. Previously unheard recordings of “Stepping Stone,” “Jungle,” “Cherokee Mist” (which features Hendrix on both electric guitar and sitar) as well as the January 1968 recording of “Sweet Angel” provide further highlights.

Both Sides of the Sky also features an assortment of notable guest musicians. Stephen Stills befriended Hendrix at the June 1967 Monterey Pop Festival. In September of 1969 Stills was invited to a Hendrix session at the Record Plant in New York. Stills burst into the session with a song Joni Mitchell had recently composed, titled “Woodstock.” Joined by Hendrix and Buddy Miles, the trio recorded this version first–months before Crosby, Stills, Nash & Young released their popular rendition of Mitchell’s song. Stills would also contribute $20 Fine, an original song that featured Hendrix on multiple guitars, Mitchell on drums, Stills on organ and lead vocals and Duane Hitchings (Buddy Miles Express) on piano.

Another of the album’s unique band creations sees Jimi Hendrix and Johnny Winter on guitar, backed by Billy Cox and drummer Dallas Taylor of Crosby, Stills, Nash & Young. An excerpt of their rendition of Guitar Slim’s “Things I Used To Do” was initially heard as part of a 1990 nationally syndicated radio program and accompanying box set, but here it is presented in full, newly mixed by Eddie Kramer for Both Sides of The Sky. On “Georgia Blues,” Jimi is reunited with his old bandmate Lonnie Youngblood (vocals/sax) from his pre-fame days in Curtis Knight & The Squires. Briefly issued as part of the 2008 Martin Scorsese Presents the Blues series but out of print for nearly a decade, this special recording is once more available to Hendrix fans throughout the world on all audio formats.

Both Sides of the Sky was produced by Janie Hendrix, John McDermott, and Eddie Kramer. Kramer served as recording engineer on every Jimi Hendrix album made during the artist’s life. In order to preserve the integrity and continuity of the Hendrix legacy, this same team has produced every Jimi Hendrix audio and visual release since 1996.

Janie Hendrix, President and CEO of Experience Hendrix, L.L.C. commented, “We have a growing commitment to preserve the legacy of Jimi and also to continue to give the worldwide family of Jimi fans quality releases. That’s what “Both Sides of The Sky reflects…our ongoing commitment. In a deeper sense, it’s the keeping of a promise. Jimi and I once made a promise to each other. He said he would take care of me and I told him I would take care him. Through his music and our preservation of his work, my brother and I honor one another. We are now in our third decade of watching over Jimi’s creative works and our resolve to maintain the integrity of what he left us has only grown stronger with time.”

That is also the purpose for Eddie Kramer’s involvement and his devotion to the project. He remarked, “Jimi’s true home was the studio, that’s where the music and the magic happened. He loved everything about recording and it’s been my distinct pleasure and an honor to play a part in that process both then and now.”

Both Sides of the Sky tracklist: