There are many who would agree that classic jazz from the 1950s and ’60s sounds best when played on the medium it was originally intended for – namely, the vinyl LP. With that in mind, UMe is proud to present three vinyl box sets via Verve Records focusing on key albums from three of jazz’s biggest and most influential stars from its golden era: singers Billie Holiday and Dinah Washington, together with tenor saxophone sensation, Stan Getz. Available December 8, each box set contains five of the artists’ most popular and enduring albums mastered on 180-gram vinyl, and presented in authentic period sleeves that reproduce the original artwork. For those who prefer CD, the collections will be available on December 15. Dubbed “Lady Day” by jazz saxophonist, Lester Young, Billie Holiday (1915-1959) is one of the most influential and iconic jazz vocalists of all time. Her uniquely expressive voice, with its unmistakable tone, timbre, and horn-like phrasing, had an emotional sincerity that made everything she sang seem an honest reflection of her own personal struggles in life. Holiday was born Eleanora Fagan in Philadelphia and after experiencing a difficult childhood, found an escape through music. She began singing professionally as a teenager in the late 1920s and signed her first recording contract in 1935, before going on to work with the swing-era big bands of Count Basie and Artie Shaw. By the 1940s, she was a big solo star but behind the showbiz glamour there was a dark underside of drug and alcohol dependency, which eventually hastened her tragic demise (she died in 1959 aged 44).

Classic Lady Day catches up with Holiday at the dawn of the LP age in the 1950s when she recorded for the Clef and Verve labels founded by jazz impresario and producer, Norman Granz. The opening album in the set is 1957’s Solitude: Songs By Billie Holiday, which was first issued in 1952 as a 10-inch LP called Billie Holiday Sings for Granz’s Clef imprint. It’s a delightful small group session where Holiday’s beguiling voice is framed by sympathetic and lightly-swinging arrangements played by sidemen that include pianist Oscar Peterson and guitarist Barney Kessell. Holiday’s mournful version of Duke Ellington’s immortal “Solitude,” with Charlie Shavers on trumpet, is particularly arresting. Holiday also puts her own inimitable stamp on the standards “You Go To My Head” and “These Foolish Things.”

A Recital By Billie Holiday is a 1956 compilation that includes fine readings of “What A Little Moonlight Can Do” and “Stormy Weather,” while Velvet Moods – Songs By Billie Holiday issued the same year on Clef contains “Nice Work If You Can Get It” and “I’ve Got A Right To Sing The Blues.” Also issued in 1956 was Holiday’s most famous album, Lady Sings The Blues, which she released to coincide with the publication of her same-titled autobiography. It contains the classic title song – co-written by the singer – and another original iconic tune, “God Bless The Child.” Another highlight is her haunting version of American writer Lewis Allan’s provocative but poignant anti-lynching poem set to music, “Strange Fruit.”  Classic Lady Day concludes with the 1958 Verve LP, All Or Nothing At All, released a year before the singer’s death. It contains memorable performances of “April In Paris,” “Sophisticated Lady,” and “Love Is Here To Stay.”

Famed for her clear diction, crisp phrasing, and declamatory delivery, Dinah Washington (1924-1963), like Billie Holiday before her, possessed an immediately recognisable singing voice. A 1993 inductee in to the Rock And Roll Hall Of Fame, Washington was born Ruth Lee Jones in Tuscaloosa, Alabama, and first recorded during the 1940s, serving up risqué blues songs. In the 1950s, Washington – who called herself the “Queen of the Blues” – recorded a clutch of classic albums for the Mercury subsidiary, Emarcy, that revealed her to be a sophisticated song stylist who could sing blues, jazz, and pop with consummate ease.

The Divine Miss Dinah box set begins with After Hours With Miss D, a superb 1954 session with legendary horn players, Clark Terry and Eddie “Lockjaw” Davis, in attendance. A finger-clicking “Blue Skies” is one of many standouts. The electrifying Dinah Jams, recorded live in front of a studio audience in 1954, has a looser, improvisational flavor and features bebop trumpet legend Clifford Brown. Mellower and more overtly romantic is 1955’s For Those In Love, which contains one of Washington’s most popular tunes, “Blue Gardenia,” and finds the singer backed by a small ensemble that includes future Miles Davis Kind Of Blue band members, pianist, Wynton Kelly, and drummer, Jimmy Cobb.

In sharp contrast, 1957’s The Swingin’ Miss D, has Washington collaborating with the then rising arranger/conductor Quincy Jones and his orchestra. Packed with effervescent big band uptempo tunes (such as “Caravan”) and stylish heart-rending ballads (“You’re Crying”), it proves to be an inspired and exquisite pairing of talents that oozes pizzazz. 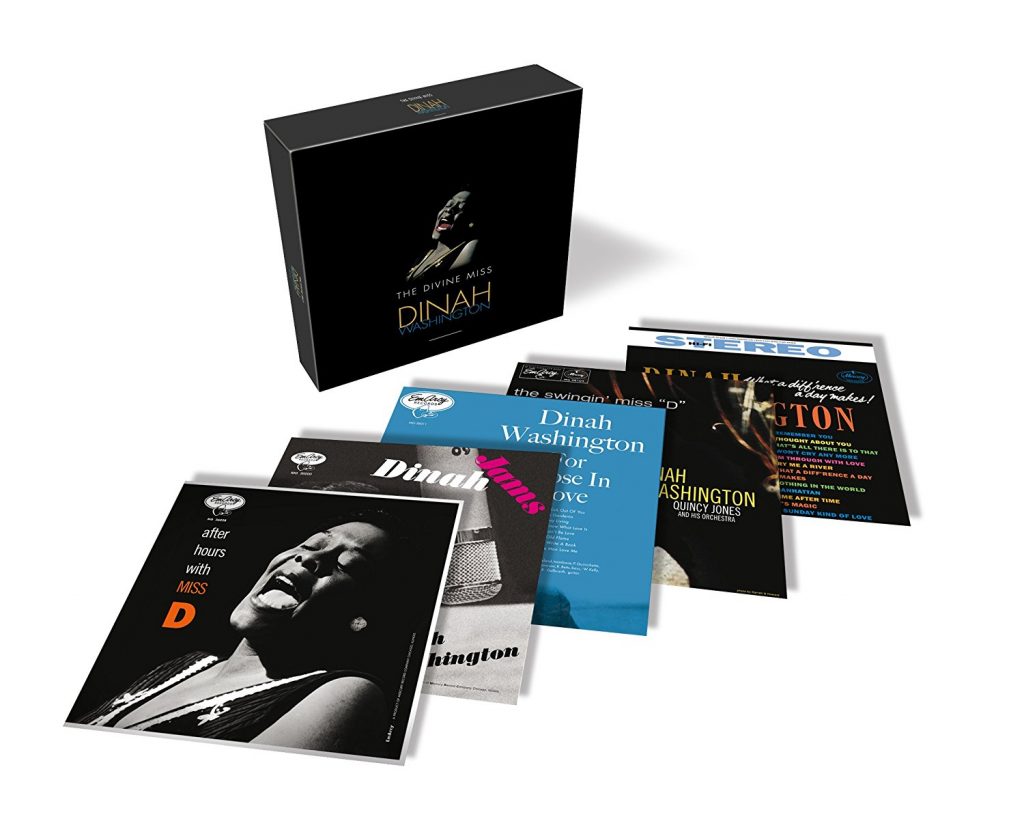 Two years later in 1959, Washington scored a Top 10 US pop hit and grabbed a Grammy award with her striking remake of the Dorsey Brothers’ 1934 smash, “What A Diff’rence A Day Makes,” which featured on her album with the same title. What A Diff’rence A Day Makes! also spotlighted future Weather Report co-founder, Joe Zawinul, on piano, and found Washington, augmented by a lush string orchestra, putting her own spin on standards like “Cry Me A River,” and “Manhattan.”

The final box set in this batch of box sets focuses on tenor saxophonist Stan Getz. Though born in Philadelphia, Getz was a key architect in the development of the US West Coast “cool school” sound and was heavily influenced by the airy tone of his idol, saxophonist, Lester Young. Getz rose to fame in the late 1940s after serving his musical apprenticeship in the bands of Jack Teagarden, Benny Goodman, and Woody Herman. As a solo artist, his career took off in the 1950s, a time when he earned the nickname “The Sound,” which referred to his light, feathery saxophone tone and gift for effortless melodic improvisation.

Bossa Nova Years catches up with Getz’s career in the early 1960s, when he was signed to Verve and expanded both his repertoire and audience by marrying cool jazz with an exciting and sensuous new form of music from Brazil called bossa nova. 1962’s Jazz Samba LP – recorded in tandem with noted classically-trained acoustic guitarist, Charlie Byrd – was Getz’s first foray into bossa nova and helped to popularize the music in America. The album topped the US LP charts, aided by the commercially successful single, the Grammy-winning “Desafinado.”

Getz explored Brazilian music in a large ensemble setting on his next album, Big Band Bossa Nova, also released in 1962, which placed his saxophone against a big band backdrop (expertly arranged by Gary McFarland) with spectacular results. Among the standouts are “Manha de Carnival,” which is driven by pulsating samba rhythms, and the more reflective “Melancolico.”

The Brazilian theme continued on 1963’s Jazz Samba Encore! It featured Rio de Janeiro guitarist Luiz Bonfá, and also acclaimed bossa nova songwriter, Antonio Carlos Jobim, who appeared on guitar and piano. Significantly, Jobim was the co-writer of “The Girl From Ipanema,” the big hit from Getz’s next album, Getz/Gilberto, a collaboration with Brazilian guitarist and singer, Joao Gilberto. Gilberto’s then wife, Astrud, supplied delicate, spellbinding vocals on “The Girl From Ipanema,” which was released as a single and became a substantial international hit in 1964 (it also won a Grammy). More significantly, it helped to launch Astrud Gilberto’s own career as a singer.

The final LP in the Getz package is Stan Getz With Guest Artist Laurindo Almeida, recorded in 1963 but not released by Verve until three years later. It finds Getz hooking up with renowned São Paulo guitarist, Laurindo Almeida, whose delicate but highly rhythmic fretboard work underpins some wonderfully mellifluous horn-blowing by the saxophonist. Highlights include the breezy “Menina Moca” and the gently undulating “Once Again,” both spotlighting Getz’s burnished lyricism. No serious jazz collector will want to miss out on these three superb collections.