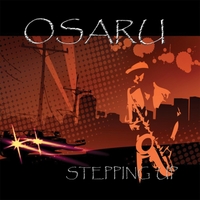 ‘Stepping up the B-Side’ is an alternate version of his recently released album, Stepping Up. All of the songs have been remixed. In ‘old school terms’, these would be classified as singles… except you have all 10 singles packaged in a very thoughtful cohesive album. Most striking is the more laid back feel to this version. He removes all the background vocals, creating a totally different experience for the listeners, who can now interpret the songs in any way they want to. Strategically placed mutes and various other sounds replace the background vocals. All 10 tracks are originals written, performed and produced by the artist. They feature smooth, melodic tenor and soprano sax phrasing, sprinkled with subtle keyboard, guitar and mute trumpet lines on a background of punchy, laid-back grooves. The perfect music for ‘chilling out’ when the need arises.

Osaru described ‘Stepping Up’ as ‘smooth jazz with attitude.’ On the B-side version, he combines his skills on the keyboards, saxophone and wind controller with his song writing, arranging and production skills. The end product is a chilled-out, positively charged, groove swathed album. From the mid-tempo funk of ‘The Music Train’ to the slow dance of ‘Remember’, you will find yourself tapping your foot and bobbing your head as each groove unfolds. By the time ‘What A Great Day!’ comes on, with its contemporary R and B beat, you can truly feel the optimism in the album. The album closes on a high note with the aptly titled song, ‘Let’s Go’, which is an all-out jam with tenor sax, soprano sax, electric guitar and piano all accounted for in this splendid conclusion to the album.