Landing in Indonesia’s bustling capital city, Jakarta, for its third annual edition on August 13 & 14, We The Fest – THE ultimate summer festival – has announced its full line up and set times. Featuring a schedule bursting with some of the hottest international and local artists across the pop, rock, indie and dance music spectrum, the trailblazing two-day event is being hailed as one of the most hotly anticipated festivals in the Asian music calendar. 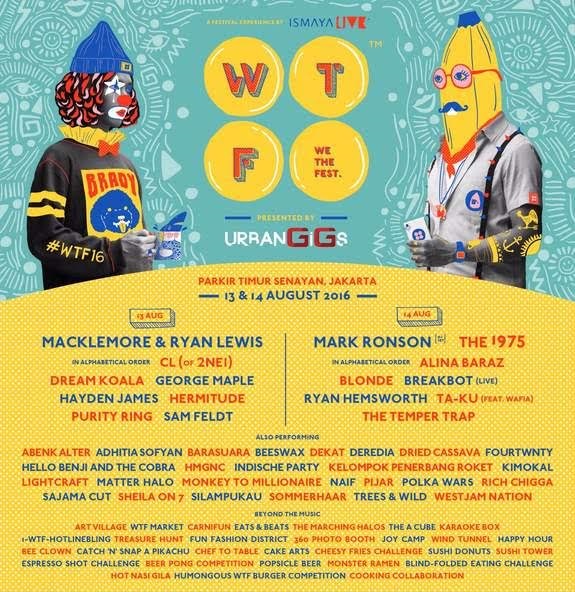 Boasting three spectacular stages brimming with a diverse array of world class talent, this year’s edition of WTF is set to be its biggest and best yet. Grammy award-nominated Macklemore & Ryan Lewis, ‘Uptown Funk’ mastermind Mark Ronson, The 1975, The Temper Trap and Hayden James will all be heading to Jakarta’s magnificent Parkir Timur Senayan for an unforgettable weekend of music and entertainment.

The most recent addition to the lineup, singer/songwriter, rapper, fashion icon and team leader of South Korean girl group, CL, will also be flying in for what promises to be a performance of iconic proportions. In addition, UK based deep house production duo Blonde, will be joining previously announced electronic music acts Sam Feldt, Hayden James and Ryan Hemsworth, to deliver what will no doubt be one of the weekend’s highlights.

Much more than just your average music festival, WTF is a celebration of music, arts, fashion and food, with a huge range of areas and activities for all ages to partake and enjoy. Providing a truly exceptional festival experience from the off, WTF has invited marching band, The Marching Halos, for an opening parade with a punch – just one of the many tricks the organizers have up their sleeve over the course of the two days!

Fashion savvy festivalgoers will be able to catch up on all the trends as part of the ‘H&M x We The Fest’ on site partnership this year, which will see the fashion giant also host their very own stage (This Stage Is Bananas). There will also be a WTF market, full of some of the very best of local Indonesian brands, for those wishing to pick up a one-off design to take back home. With murals and installations making up the backdrop of the festival, art enthusiasts will be able to peruse the Art Village where they will be able to shop and even craft their own work of art. Those wishing for a festival feast can head to the Cooking Stage and witness a host of star chefs whip up an array of delectable treats – from cakes to curries – sure to tantalize the taste buds.

As the leading promoter of live music events in Indonesia, committed to bringing world-class talent to the thriving capital via festivals such as WTF, Ismaya Live is responsible for putting Jakarta on the map as one of South East Asia’s hottest destinations. Offering unparalleled experiences for their local and international attendees, with a very limited number of tickets still available for the third edition of WTF, be sure to get yours now and make memories that will last a lifetime.