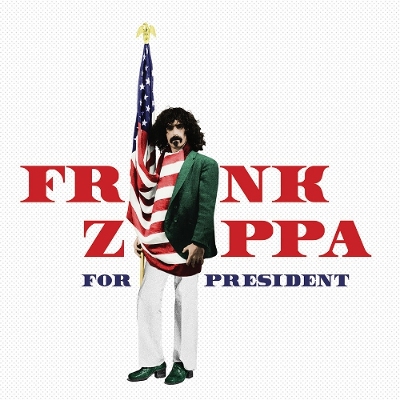 Two new Frank Zappa titles, Frank Zappa for President and The Crux of the Biscuit, will be released on CD July 15 by Zappa Records/UMe. Both releases feature previously unreleased material from the Zappa Vault.

Frank Zappa for President? You betcha! We know at various times he wanted to run for office. In the spirit of the dramatic 2016 presidential election adventures comes a release that gives us a glimpse into what could have been. This album is comprised of unreleased compositions realized on the Synclavier, along with other relevant tracks mined from the Vault, with a political thread tying it all together. Don’t forget to register and vote!

The Crux of the Biscuit was created in conjunction with the 40th anniversary of Frank Zappa’s 1974 album Apostrophe(‘). As part of Zappa Records’ ongoing Frank Zappa Project/Object Audio Documentary Series, it contains rare alternate mixes, live performances, and studio session outtakes. This release celebrates Zappa’s iconic, Gold-certified album, which landed in the Top 10 of the Billboard 200 albums chart.

EAT THAT QUESTION – FRANK ZAPPA IN HIS OWN WORDS is a feature documentary that will be released on June 24 by Sony Pictures Classics. EAT THAT QUESTION is an intimate encounter with the iconoclastic composer and musician, constructed solely by rare archival footage. The film reveals a provocative 20th century musical genius, rock legend and intellectual firebrand whose worldview reverberates into the present day and beyond.