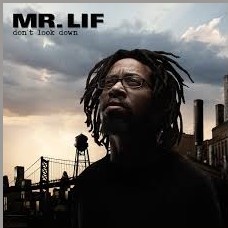 In 2015, Mr. Lif signed a multi-album deal with budding Hiphop stalwart Mello Music Group (Oddisee, L’Orange, Apollo Brown, Pete Rock, Open Mike Eagle) and put in motion the next steps in his solo career. The new album, “Don’t Look Down,” jumps in right where Lif left off with a sharp, tight, cohesive concept album that goes down the rabbit hole into the dark days and shining salvation of an American youth caught in the abyss of unexpected violence. The story continues to find him discovering the potion of love, only to eventually escape. This is an album filled with heartbreak, weariness, technological insight, political calls to action, and hope for those most lost in the babylon of contemporary America. The advice: avoid the fall from walk to crawl. Don’t Look Down.

Featuring Edan, Del The Funky Homosapien and The Perceptionists