In the weeks that followed the terrible, senseless terrorist attacks on Paris on November 13, 2015 – during which many innocent lives were taken at an Eagles Of Death Metal show at Le Bataclan – EDOM reached out to their musical family, asking them to extend the same outpouring of support and kindness that everyone from the members of U2 to the French authorities had shown the band, and join their Play It Forward campaign.

The campaign asks artists the world over to cover “I Love You All The Time” from EDOM’s current album Zipper Down. For every cover sold, the band pledges to donate 100% of its publishing income to The Sweet Stuff Foundation, the non-profit organization founded in 2013 by EODM co-founder Joshua Homme to provide assistance to musicians and their families in times of need, as well as musical education and gear for the next generation. Participating artists were also asked to donate the money generated from sales of the song to the charity.

So far, artists such as Florence + The Machine (featuring the Maccabees), Ed Harcourt, Imagine Dragons, Jimmy Eat World, Alain Johannes, Kings Of Leon, Mini Mansions, My Morning Jacket, The New Pacific, R00ms, Savages, and Dean Ween Group have joined the cause and recorded covers, in addition to France-natives SINNER SINNERS.

Comprised of married couple Steve and Sam Thill, SINNER SINNERS jumped at the chance to join their longtime friends in EODM in this opportunity to give back to their brethren. Steve Thill tells the story of the time between those horrific few moments in Paris and their connection to the Play It Forward campaign.

“Friday, November the 13th, it was around 1pm when we got the text from our friend Chacha “Shooting at the Eagles of Death Metal show in Paris” it sounded like a prank. It took a minute to realize it wasn’t, then the panic hit us,” begins Steve Thill.

“Not only are the Eagles Of Death Metal some of our closest friends, but we are neighbors. We had just toured together a few weeks before and were supposed to meet them in Nimes France in December. Being a band from France and part of this particular scene, it feels like it was our community as a whole who was being attacked. From Los Angeles, the only thing we could do was calling to check on everyone we knew and being away from our country, we felt an enormous guilt of being helpless.”

Thill continues, “The first 24 hours after the attacks we of course couldn’t sleep. We were able to reach Tuesday who told us the band made it out and were alive, and learned the horrible news that Nick their merch guy and 129 other innocent lives had been taken. It took a few days to know every one of our friends made it that night but they had all lost someone and some of the victims are still in a coma as of today.”

It’s been a month now since the tragedy, and we’ve realized there’s no such a thing as healing or getting over it. We’ll just all have to live with it for the rest of our lives.
When EODM came back to L.A we saw Jesse, Tuesday and Eden, in front of us, alive. That’s when the mourning started, the anxiety that kept us up for days came to an end and we crashed. For a while everything stopped – we didn’t want to go out. We didn’t want to play or even listen to music.

When Jesse and Josh told us about their “I Love You All the Time” cover project with the Sweet Stuff Foundation, we finally had an opportunity to do something to help a little. There was no way for us not to participate. For the past five years, Jesse had done so much to help us and our band, all out of true kindness and generosity, never asking for anything in return. We had just toured with them a few weeks before where we met Davey, Matt, Shawn, Steev and all the gang. This tour was some of the best times of our lives and we owe so much to Jesse and Eagles of Death Metal. 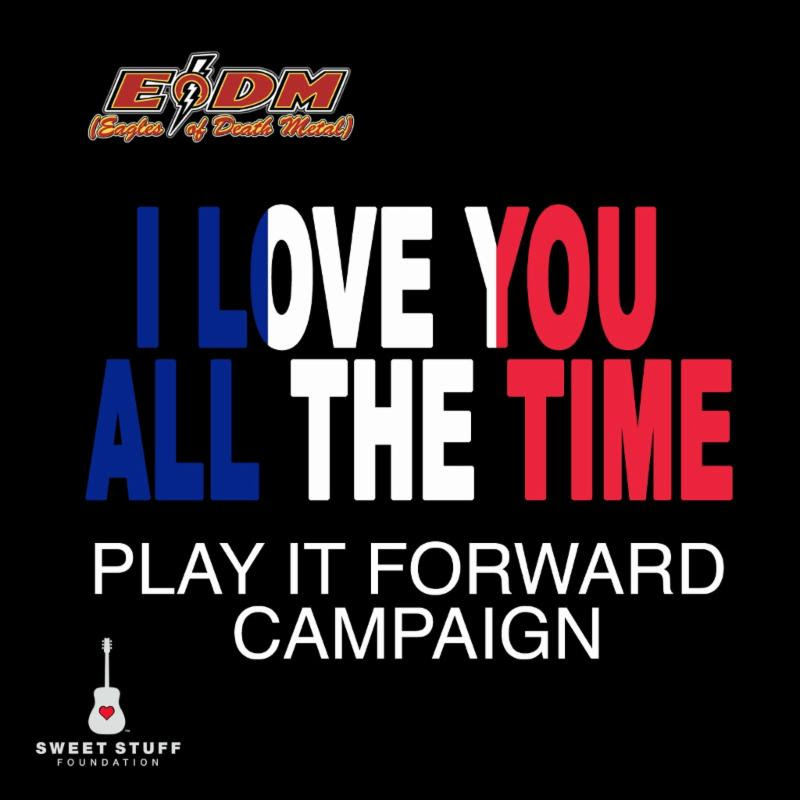 Nic Jodoin, french Canadian producer who worked on our previous record was very touched as well and wanted to get involved to help the cause.”

On December 2nd, SINNER SINNERS, Nic Jodoin, and Jesse Hughes joined the rest of the band (Michael Amster on drums, Macy Mullen on lead guitars, Mike McCrary on bass, Ben Palmer on guitar, and Celine Royer and Tuesday Cross on vocals) at Valentine Recordings, to record their cover, attempting to pay the best homage they could by doing so as lightly, happily and positively as possible, as an ode to life and art. It was the first time they performed music since the attacks.

Thill continues, “Valentine is full of vintage gear from the 60’s, everything was recorded on tape. We started at 2pm and continued recording until 5am. Jesse and Tuesday stopped by the studio to check it out, they stuck around till late and ended up getting involved.”

We reached out to Simon Capony at Basalte studio in France, he instantly said “Yes, send me that song I’m gonna give it some balls, let’s show these bastards we won’t stop doing what we do.”

Jeremy Thomas, a French videographer also based in LA wanted to be involved in the project and made a music video including images from the band’s recording session. SINNER SINNERS asked their friends in Paris to ask their friends to send the band videos of Paris, shows, streets, things they like to add to the music video and show a little bit of happiness and the Parisians being Parisians.

They received amateur and professional videos, filmed before or after November 13th. All good memories, all enjoyable moments, all from the heart. SINNER SINNERS added those to the video as this moment is not just ours but everyone’s.

“Such great solidarity and pure love came out of people around the world following this tragedy, it’s the reason why we do this.”

All proceeds will be donated to the Sweet Stuff Foundation.  As mentioned above, the track was recorded, mixed and mastered by Nic Jodoin at Valentine recording studios in North Hollywood with the help of Michael Amster, Céline Royer, Tuesday Cross and Jesse Hughes. The video piece was filmed and edited by Jeremy Jettho Thomas with footage joyfully filmed and shared by Sebastien Paquet, Arthur, Anne, Remy, Vincent also Chacha, Damien and Billy at Riot House Productions.
Thill adds, “We hope you will enjoy it and we would like to thank everyone who helped, shared, filmed, played, recorded, sung, danced, drunk, joked etc… with us around that project. Thanks again to everyone who keeps life, love and rock n roll alive! We Love You All The Time, and Paris, we also “Love You All The Time”. Peace, love and fucking death metal!”
To share this article: