Static Fiction, the Punk Pop Rock band from Huntington Beach, CA is pleased to bring you their sophmore EP “ALL IN”, another excellent production effort by the award winning producer Ryan Greene, {NOFX, Bad Religion, Megadeth, Jay Z, Usher} which highlights the “fun” flowing through the songwriting. 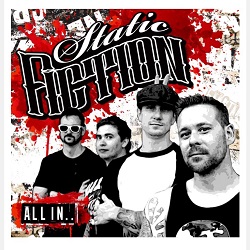 Founding members Paul Lapinsky and Ryan Brown teamed up with drummer Derek Goodwin and guitar player Noah Dunbar to bring you the new “Static Fiction”. With the new talent Static Fiction is now heavier than before.

“All In” is appropriately titled as a collection of songs that segue nicely from the 2012 self titled release while keeping their “sound” fresh feeling. While their foundation is undeniably punk-rock, Static Fiction give their music a brisk boost by seamlessly infusing power-pop into the mix and crafting slick, energetic songs that are impossible to resist and elevate.