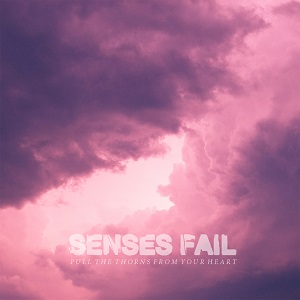 Senses Fail frontman Buddy Nielsen has spent his entire life carving out his own path, both musically and personally. His devout dedication to Vipassana meditation and studies of Buddhist teachings have allowed him to find peace within himself, embrace his differences and eventually find comfort in his newfound identification as queer. Buddhism and being queer have direct roles in the creation of his band’s new album “Pull The Thorns From Your Heart”. “This record is the complete documentation of my transformative spiritual experience from the darkness to the light” says Nielsen “It is the completion of a journey I have been on since I started making music when I was 17. I want this record to be more than just words and music but a blueprint for how through contemplative practice you can come to love, grow and blossom out of the muck of life and into the light. It is not intended to motivate in steps or exact teachings but empower. It is above all a personal story of struggle and realization”.

His journey is told through an intense collection of 11 songs that are sonically a slight departure from Senses Fail’s earlier records while maintaining the passion and delivery that the band’s fans have come to love over the years. “I wanted the heaviness and anger of the record to not be matched with equal words of despair but words that show growth and change” he adds “Most music that represents change and growth is calmer and less abrasive but I wanted to show that friction is what helps spur action. Without the friction, we wouldn’t want to change, we would be content. Out of darkness is ultimately the opposite, the light, but without opposition there would be no urge to change. Half the record represents the darkness and half the record represents the light, or the appearing of light, the flowering of what the experience is”.

“Pull The Thorns From Your Heart” is broken up into 4 non sequential acts that are named after Buddhist concepts and teachings, I – Annica & Sacca (Impermanence & Truth, II – Tisarana (The Three Jewels), III – Maransati (Mindfulness of Death) and IV – The Brahmaviharas (The Heavenly Abodes), which provide a blueprint for the overall arc of the record.

The newly released track “The Importance of The Moment of Death” is found in the record’s third act and the video is a personal reflection of Nielsen’s former self. “The video while not directly reflecting on the lyrics or the topic of the song, represents the world I had been living in, unsafe, unwelcoming and down right fucked up” Nielsen explains “It is a mythic representation of how innocence can be forcefully taken away from us as children, leaving us with too much too soon and without the proper coping skills i.e. me! The clown represents an innocence and in this case a lack of innocence, or the mode by which innocence can be lost. The parents represent the guardians, the creators, the ones who oversee our growth from childhood to adulthood and the children, the curious initiates. The clown is actually the one who initiates the cruel and premature journey that the children take from backyard party, to striking out in retaliatory violence. During the party, the children, left unsupervised and to their own devices end up clearly getting into things they shouldn’t and being given gifts (by the parents) they shouldn’t get. When the clown arrives, he offers them a ritualistic party favor in the form of a piñata. The piñata dates back to the celebratory festivals and offerings of the Aztec god Huitzilopochtli. The ritual is celebrated and instead of their being candy, there is meat and blood. The children eat it up and pass out. They are then transformed from their former ignorant and blissful child states, into a new mode, a new interpretation of their surroundings”.s), which provide a blueprint for the overall arc of the record.