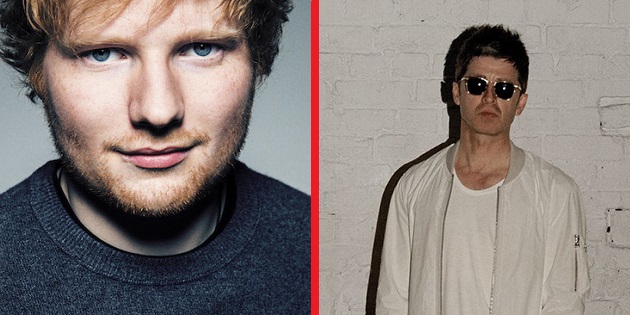 Ed Sheeran has offered Noel Gallagher free tickets for his show in Wembley Stadion. He did this in response to the remark Gallagher did about Sheerans plans to give three shows at the massive, 80.000 capacity, stadion. Earlier this year Gallagher said in an interview with NME that he can’t live in a world where Ed Sheeran will sell out the Wembley Stadion not one but three times. Sheeran responded with a tweet saying “I can live in it, it’s really enjoyable”. The Sheerios were completely outrageous with Gallagher and declared a war on twitter, but apparently it is all fine between the two of them.

Sheeran told the Daily Star “I read what he said, I texted him because I have his number ad asked him if he’d like some tickets. He wrote back, ‘You cheeky so and so. My daughter would love some’. He is always going to be the guy who’s outspoken. I wasn’t offended. I found it quite cool to be in his interview.” He continues with the fact that an insult every now and then keeps him in check. “I get a lot of stick from press and people, but it’s good to get stick. That’s why Americans go off the rails. Ego-wise you are risen and risen. Your ego grows. If you speak to anyone from Adele to Chris Martin, they would say they are grounded ‘cos they get a hiding drom the press.”