For the first time in 37 years, jazz icons Herbie Hancock and Chick Corea will be touring together again! Hancock and Corea have announced a world tour in which they both will be playing the piano. Kicking the tour off in Seattle (March 14), they will then continue to tour the US, Asia, Australia and conclude the tour with a couple of performances in Europe.

Chick Corea and Herbie Hancock met when they were both members of Miles Davis’ band in the 60’s. Together with the legendary trumpeter, they recorded top albums ‘Bitches Brew’ and ‘In A Silent Way’. 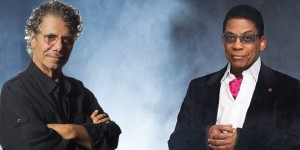