The Libertines frontman Pete Doherty says that the British rockers had the songs for the new record for a while , but that they are just now falling into playce for a debut. In an interview with NME Doherty said “We always had the tunes but we threw away so many. Some sneaked out as Internet giveaways or they weren’t recorded properly. So this is a chance for us to make a record rather than somebody stapling loads of bits together.” 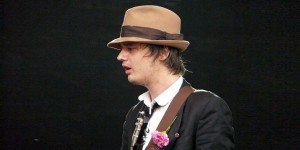 For the ones wanting to know if the recently reunited Libertines can compete with the material they put out a decenia ago Doherty says he is not to worried about all the expectations. Last month Doherty was released from rehab, where he was for his heroin addiction, and he shows that he doesn’t care what others will think of it. “I can’t say that I’ve been able to listen properly to what we did, because some part of me doesn’t want to engage with it, but whilst I’ve been clean I’ve tried to listen to some of it. If we can pick up from where we left off 10 years ago, f—k what anyone else thinks. We’re still on a path to Arcadia.That’s all that matters to me.”
Photo: Brocco Lee
To share this article: