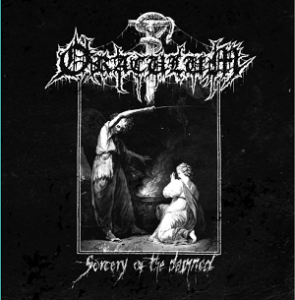 Today, INVICTUS PRODUCTIONS announces October 27th as the international release date for ORACULUM’s debut EP, Sorcery of the Damned. Despite being newcomers, this Chilean power-trio have their sound nailed down, HARD: pulsing, doom-dredging Metal of Death that’s red-eyed and composed in equal measures, manic and maniacal and yet exuding the confidence of veterans. ORACULUM state that their influences are Bolt Thrower, Morgoth, Order From Chaos, Sadistik Exekution, Poison (Germany), and their native heroes Pentagram, and while residual traces of each can be heard across the four bruised ‘n’ battering tracks on Sorcery of the Damned, the manner in which they splice and dice this deathly DNA is theirs alone. Above all, the band’s grasp of songcraft suggests the start of something monumental, each one moving memorably with depth and dynamics. Sorcery of the Damned is truly bewitching…

Tracklisting for ORACULUM’s Sorcery of the Damned
1. The Vessel of Orichalcum
2. Primeval Flame
3. Passage I
4. Endarkenment