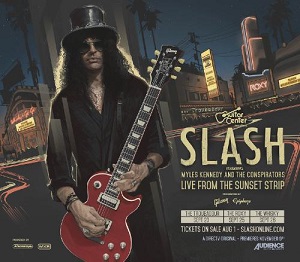 Guitar Center is proud to announce Slash Featuring Myles Kennedy and The Conspirators Live from the Sunset Strip presented by Gibson and Epiphone. The iconic guitarist is set to take over thee of Hollywood’s most legendary venues, including The Troubadour, The Whisky and The Roxy in celebration of Guitar Center’s 50th Anniversary. The shows will feature songs spanning Slash’s storied career including material from his upcoming album, World on Fire, set to be released Sept. 16, 2014.

Tickets for all three shows go on-sale August 1st at SlashOnline.com. Additionally, fans can visit guitarcenter.com/slash to enter for their chance to win a VIP trip for two to see Slash Featuring Myles Kennedy and The Conspirators live at The Roxy and take home an Epiphone Les Paul signed by the legendary guitarist. For fans unable to make it to Hollywood, Guitar Center will present Slash Featuring Myles Kennedy and The Conspirators Live from The Roxy, in a DIRECTV original 90-minute concert special filmed in stunning 4k and 5.1 surround sound. The special will premiere exclusively on DIRECTV’s Audience Network (channel 239) Nov 9th at 8 p.m.

“I’ve always admired Guitar Center’s commitment to artists,” says Slash. “They’re constantly creating new avenues for musicians to get their music out to fans and inspiring people to pick up an instrument and play. “They’ve also been supportive of my career since the very beginning here on the Sunset Strip. I am happy to be a part of their 50th celebration.”

“Guitar Center and Slash have enjoyed a relationship that spans 3 decades, so it goes without saying that we’re excited to help him launch his new record,” says Dustin Hinz, Vice President of Brand Experience and Entertainment Marketing. “Slash is a true icon that has influenced musicians his entire career and there’s nothing more important to Guitar Center than to enable artists as legendary as Slash to continue inspiring future generations of musicians. His passion and dedication to the craft make him the quintessential artist to celebrate Guitar Center’s 50th Anniversary.”