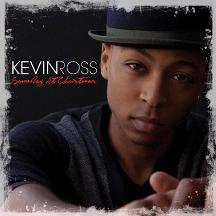 One of R&B’s most talked about new voices, KEVIN ROSS, is now confirmed to open for Maxwell on the second half of his “Summer Soulstice” headline tour. KEVIN joined the sold out trek on July 19 at The Shoe in Cincinnati, OH. The tour will stop in secondary markets all over North America before finishing up August 17 at Route 66 Casino in Albuquerque, NM. Tickets are on-sale now.

Just in time for the tour, KEVIN ROSS dropped an acoustic performance video of his song “Dream”. The track is one of four from his debut EP, DIALOGUE IN THE GREY, available August 12 through digital retailers on MOTOWN RECORDS. Punctuated by resounding acoustic guitar, the singer and songwriter’s stunning voice takes the spotlight. He delivers each word with smooth cadence before building into a powerful hook. It’s refined and real R&B. Watch the video here!

About KEVIN joining the tour, Maxwell excitedly declared, “I’ve heard many but none with this timeless way in music…your ears will never be the same.” Maxwell is not the only icon singing the rising star’s praises. Ne-Yo claims, “KEVIN ROSS is next”, while Trey Songz laudes his, “Incredible voice! Diverse songwriting ability and true artistry.” Legendary songwriter and VERVE RECORDS chairman David Foster first recognized Kevin’s talent leading to a joint signing between MOTOWN RECORDS and VERVE. Foster commented, “I’m addicted to great voices, which is why I can’t get enough of KEVIN ROSS.”

It’s shaping up to be a BIG year for him. ROSS recently performed at this year’s prestigious Essence Music Festival. Other 2014 accolades include BET dubbing him a “Music Matters Artist” and AOL Music calling him, “Best New R&B Artist”. However, he’ll undoubtedly wake the entire game up when he drops his EP, DIALOGUE IN THE GREY, August 12th.

Go hear and see the incredible KEVIN ROSS and witness the next age of real R&B.