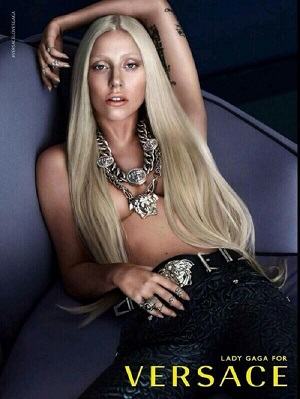 We were quite shocked: Lady Gaga started 2014 tweeting a picture of herself topless! The third tweet of her was one promoting the Spring/Summer collection 2014 of Lady Gaga for Versace: “Happy New Years from HAUS OF GAGA and @Versace! pic.twitter.com/qT37cPFb7S”. Her brests were only covered with her long blonde hair, so luckily the photo was neat enough to be shown. In november Gaga revealed being the new muze for Versace so the fashionlabel revealed the same pic of Lady Gaga on their Twitteraccount at approximately the same time. We’re glad the photo didn’t reveal all, but what about you?