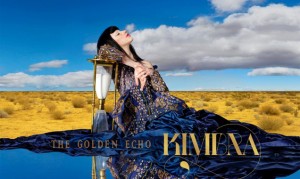 NZ/LA-based artist Kimbra will hit the road this fall for a U.S. headlining tour. The tour, supported by electro-pop artist Empress Of, kicks off on October 20th in San Francisco and stops in major cities across the country through November 9th. Tickets go on sale on July 25th. Kimbra will also perform at the Life Is Beautiful Festival in Las Vegas, which takes place October 24th-26th.

Kimbra is touring in support of her new album The Golden Echo, which will be released on August 19th via Warner Bros. Records. Her celebratory new track, ‘Miracle,’ debuted yesterday. Produced by Kimbra and Rich Costey, it features contributions from acclaimed bassist Thundercat, Daniel Johns (Silverchair) and legendary drummerJohn JR Robinson (Michael Jackson, Daft Punk). The album is available for pre-order from all participating retailers.

The ultimate modern pop record, The Golden Echo is ambitious, sophisticated, and complex, just like its creator. The New Zealand-born singer and songwriter wrote the songs in her bedroom studio on a farm in the Silver Lake neighborhood of Los Angeles, where she was surrounded by sheep and lambs owned by her landlady. A riot of genres, from Prince-like funk, to sing-songy electro-pop, to eerie space-age hip-hop, The Golden Echo was produced by Kimbra alongside Rich Costey (Foster The People, Interpol, Muse), and features further contributions from R&B singer Bilal to Queens Of The Stone Age bassist Michael Shuman, as well as famed string arranger Van Dyke Parks.

The Golden Echo is Kimbra’s second album. Her 2011 debut, Vows, bowed at No. 14 on the Billboard Top 200 and was certified platinum in Australia and New Zealand. Kimbra exploded into the public consciousness that same year with “Somebody That I Used To Know,” a duet with Gotye that earned her Grammy Awards for “Record of the Year” and “Best Pop Duo/Group Performance.” The song topped Billboard’s Hot 100 chart in 2012 and was the best-selling song of that year in the U.S. It has sold more than 13 million copies.