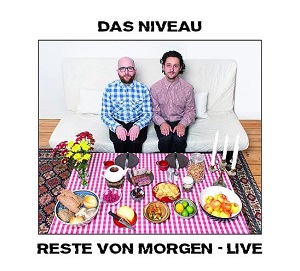 The Berlin based comedy folk duo Das Niveau can be compared to Roulette. You can have a distinguished system, but you still don’t know where the ball will end up. When Martin Spieß (vocals and guitar) and Sören Vogelsang (vocals and kazoo) enter the stage with their combination of folk music and improvised stand up comedy, even they themselves don’t know what will happen. They sing a song, talk to the audience, improvise a song – the float, just like the ball in the bowl. It’s not important where it ends up. It’s only important that it moves.

Just like in their live program “Reste von morgen”, that comes out as Double CD on June, 26th: somewhere inbetween Flight of the Conchords and Serdar Somuncu the two Berlin Neuköllners talk about gays and making moonshine in the bathtub, they insult their audience moments before they hug them. They sing about beards, your mother and a whole lot of weed. “Reste von morgen” is a lance thrust for freedom of speech and for silly humour, satirical and sloppy, political and platitudinous. Ladies and gentleman: Das Niveau is on the move.