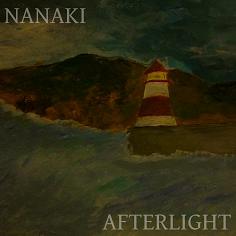 Postcode guitarist Mikie Daugherty kicked off 2014 with the release of an EP in his Nanaki guise. Released once again by Small Bear Records, the five-track Afterlight EP contains music that was recorded in the autumn of 2013 whilst Postcode was regrouping with a new drummer, with a cover painted by brilliant Leeds-based artist Grace Turner. As usual, rather than waste space attaching files here, the EP, along with some promo shots, can be downloaded from Bandcamp – http://nanaki.bandcamp.com/album/afterlight.

Back in the early-to-mid part of the last decade Nanaki was an instrumental Post-Rock-type band based on the Isle of Man, at a time that such a thing was not really deemed socially acceptable in the local scene. Known for their intense performances and excessive volume, Nanaki only released one album in their lifetime, the exceedingly limited-edition Fashion Is The Enemy Of All Art, back in The Summer Of Rock, 2003. That record predated the existence of Nanaki as a full band, having been written and recorded by Mikie and, on some songs, bassist Emma Ryan before the addition of extra personnel to the line-up. This new EP was recorded in a similar manner, with all instrumentation being handled by Mikie, with no intention to return to live performance with other musicians. Perhaps less obviously Post-Rock than the live band had been, Afterlight also sees Nanaki explore new areas, including experimentation with tempo changes and, in Saint Alessa, a ‘concept’ piece of sorts (though that is irrelevant to the listener, it was simply a new method of writing).