Multi-platinum, Grammy-nominated rockers Saliva are back with their new album Rise Up, and are pleased to announce that the official pre-orders for the album are live now via iTunes and Amazon. Rise Up is produced by acclaimed producer Bobby Huff (Papa Roach, 3 Doors Down, Tim Finn), and will hit stores on April 29, 2014 via Rum Bum Records. 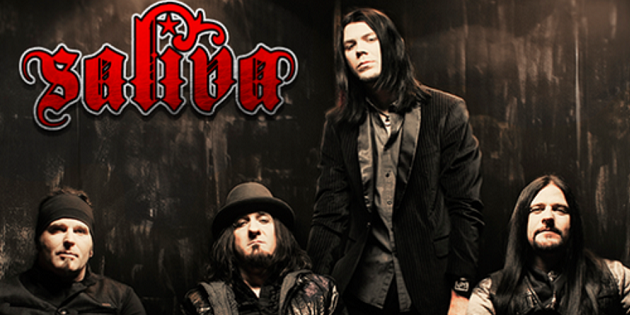 Internationally renowned, Grammy-nominated/AMA-nominated hard rock band Saliva blasted onto the scene in 2001 with their double-platinum certified album Every Six Seconds, featuring the hit tracks ‘Superstar’, ‘Your Disease’, ‘Click Click Boom’, and ‘After Me’. Tracks from the record were featured in popular media ranging from the original Fast And The Furious film, Dracula 2000, WWE Wrestlemania and No Mercy, and video games like Spy Hunter, BMX XX, Project Gotham Racing, Tiger Woods PGA Tour 2003, and many more. In 2002, the band garnered more attention with former lead singer Josey Scott taking part in a duet track with Nickleback vocalist Chad Kroeger for the track ‘Hero’, appearing on the Spider-Man soundtrack. Later that year, the band’s next release, Back Into Your System, launched the track ‘Always’, which hit the #1 on the Modern Rock Charts. The next several years included more successes for the band, including 2004’s Survival Of The Sickest, which featured the hit single ‘Rest In Pieces’, and also churned out several tracks in video games like NASCAR 2005 and television events like WWE’s Unforgiven. Three years later, the band continued to see major success with 2007’s Blood Stained Love Story, which debuted at #19 on the Billboard Top 200 charts and boasted the popular single ‘Ladies and Gentlemen’. The band’s next two albums, Cinco Diablo and Under Your Skin, each saw Billboard Top 200 debuts within their first week of release, respectively. Now with a new singer Bobby Amaru, Saliva looks forward to a bright future with their refreshed rock sound and line-up, which also includes guitarist Wayne Swinny, bassist Dave Novotny, and drummer Paul Crosby.

Rise Up marks the true revival of Saliva, presenting the band doing what they do best— true, gritty, heavy rock n’ roll. Long-time Saliva fans will be beyond pleased with the Rise Up— a bold record full of big hooks, major swagger and plenty of amazing guitar work. SALIVA is currently out on a 50+ date trek across the United States, hitting major and minor markets, while performing past favorites and brand new tracks. In a collective statement, the band says, “Tour is rockin away… it’s always good to see familiar faces as well as new ones. The set is kickin’ ass and we are keeping the show production and performance fresh to give fans a new taste of what’s new with SALIVA. Can’t wait to drop the record and continue the SALIVA future!”