The U.S. Postal Service will take center stage on the SXSW Outdoor Stage at Butler Park with the dedication of the Jimi Hendrix Forever Stamp. Widely recognized as one of the most creative and influential musicians of the 20th century, Hendrix displayed an innovative style that embraced the influences of rock, R&B, modern jazz and the blues, inspiring musical artists of his era and beyond. The Jimi Hendrix Forever Stamp goes on sale today at Post Offices nationwide, online at usps.com/stamps, and at the Postal Store on eBay. 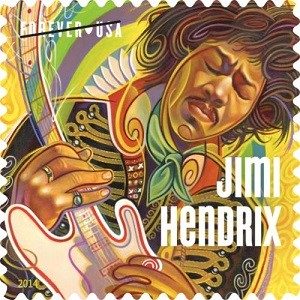 “I am deeply touched and so are other members of the Hendrix family by the issuance of this stamp, and I wish to thank the United States Postal Service for bestowing one of our nation’s highest honors on my brother Jimi,” said Janie Hendrix. “While my brother has been cited many times as being among the most influential musicians of all time, the recognition implicit in his being portrayed on a U.S. postage stamp ranks as an unparalleled honor.”

The Postal Service has released numerous stamps to celebrate and honor music icons who had a big impact on American culture and the music industry. The Jimi Hendrix Forever Stamp kicks off the 2014 Music Icons series, which will include Janis Joplin later this year. The 2013 Music Icons series honored Johnny Cash, Ray Charlesand Lydia Mendoza.

The new limited-edition Jimi Hendrix stamp, designed by artist Rudy Gutierrez, features a vibrant, colorful design fashioned to evoke the movement and rhythm of the late singer and pay homage to the psychedelic rock era of the 1960s.

The stamp pane, designed to resemble a vintage 45 rpm record sleeve, features a painting of Hendrix’s face surrounded by colorful swirls and small icons that reference song lyrics or aspects of Hendrix’s life. The various icons include flowers, a guitar, a mermaid and a butterfly. The stamp art shows Hendrix in performance, wearing one of his trademark vintage military jackets and playing one of his beloved white Fender Stratocaster guitars.